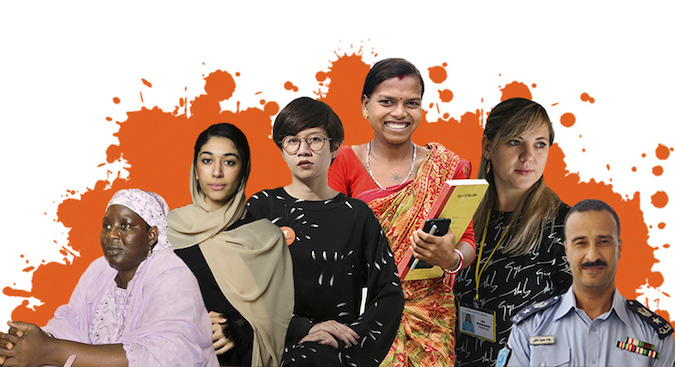 The 16 days of activism to end violence against women and girls campaign will highlight survivors’ stories of breaking the circle of violence, and inspiring other women to seek support services.

This year, the United Nations in Moldova organizes multiple events as part of the international campaign “16 Days of Activism Against Gender-Based Violence”, which takes place every year between 25 November – 10 December.

The 16 days of activism to end violence against women and girls campaign will highlight survivors’ stories of breaking the circle of violence, and inspiring other women who find themselves in abusive relationships to seek support services. UN Moldova will also support numerous public activities, such as theatrical performances, discussions with boys and men, public lessons, media forums and flash-mobs.

Moreover, through a UN partnership with telecommunications company Orange, all subscribers will receive on their mobile phones the message ‘Domestic violence is a crime. Call free 0-8008-8008 to report an abuse or if you need counseling’. This SMS will encourage women and men to stop tolerating violence against women and girls and call the 24/7 hotline 0-8008-8008.

Since gender stereotypes, harmful norms, fear, and misconceptions are obstacles that keep women in abusive relationships, UN Moldova will run a social media campaign to inform about women’s rights and break the myths around violence against women.

In the Republic of Moldova, the 16 Days campaign is organised for the 18th consecutive year by the Government, local authorities, international organisations, and the civil society. The colour of the campaign is orange, which symbolises a bright future for each girl and woman.

To support the voices that are not being heard, we urge women and men to take a stand, and to publish solidarity messages on social media with the hashtag #YouToo.

The campaign ‘16 days of activism against gender-based violence’ starts on the 25th of November, the International Day for the Elimination of Violence Against Women, and ends on the 10th of December, Human Rights Day.

Related News
25/11/2020
United against violence - UN family in Moldova kicks off the 16 Days of Activism against Gender-based Violence
25/11/2020
UN Women Moldova has illuminated in orange public buildings in Chisinau and other regions as a sign of solidarity, aiming at eliminating violence against women
26/11/2019
Generation Equality stands against rape! Launching event of the campaign "16 Days of Activism Against Gender-Based Violence” took place in Chisinau
04/12/2018
“LIBERĂ”, a theater performance about prejudices and stereotypes, played in Chisinau, Moldova
25/11/2018
[Op-Ed] “Women survivors of violence are not only the victims. They possess solutions to this aggravated form of human rights violation”
END_OF_DOCUMENT_TOKEN_TO_BE_REPLACED