Op-ed: Time is now for justice and gender equality 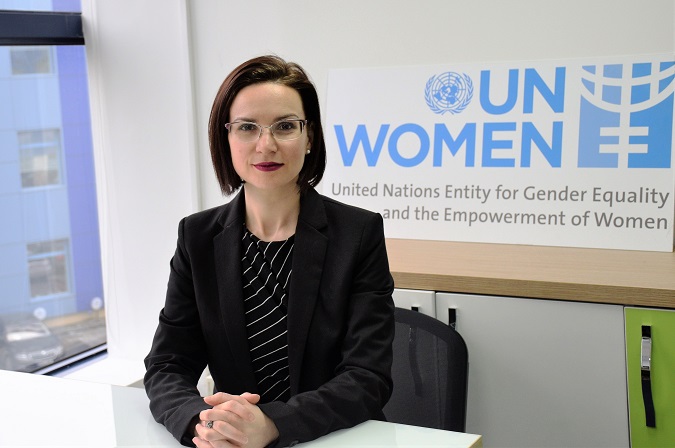 This year’s commemoration of International Women’s Day comes against a backdrop of unprecedented global mobilization for women’s rights, equality and justice. Sexual harassment, violence and discrimination against women have captured headlines and public discourse, propelled by a rising determination for change. Through marches of solidarity, powerful statements and viral social media conversations such as the #Metoo, #TimesUp, ‘Ni una menos’, #BalanceTonPorc, activists, young and old, from around the world have made clear that the time for a more equal world is right now. International Women’s Day is an opportunity to stand in solidarity with all those fearless women and girls who have been central to this global push to end gender discrimination, and to call for urgent action to achieve lasting change.

Today, despite some progress, we still find that women’s rights and empowerment is far from reality in most countries. Moldova is not an exception. Although women make 52% of the population of Moldova, they only represent 22% of Parliamentarians, 21% of Cabinet Ministers, 21% of mayors, 30% of local councilors, and only 19% of district councilors. When women manage to reach high positions in the legislative and the executive branches, they are involved mostly in the social spheres, with those related to economy, budget, law enforcement or security being dominated by men. #TimeisNow for equal participation in decision-making and governance.

While there are more girls than boys in secondary and tertiary education, this does not translate into equal employment opportunities. The employment rate of women is 39%, compared to 43% for men, and women earn on average 14.5% less, which is 11,417 lei less a year. The pay gap increases significantly in higher paid sectors such as finance and ICT. Women from specific groups, such as Roma women or those with young children have significantly lower employment rate. Women’s lower participation in decision-making in political, economic and public life and on the labour market means that their capacities, talents and perspectives remain under-utilized for the benefit of Moldovan society. #TimeisNow for equal economic opportunities.

One of the factors that affect women entering, remaining and advancing in the workplace is linked to the “other side of the coin” – their responsibilities at home. When home work, such as caring for children or elderly family members, falls disproportionately on women – which is the case in Moldova, where women spent almost 5 hours per day on unpaid care work compared to 2.6 hours for men, and when state-provided quality care services are not available, this will inevitably have an effect on women’s paid employment. In this respect, the introduction in the legislation of Moldova in 2016 of 14-days paternity leave for fathers of newborn children is an important step towards more equal sharing of family responsibilities by parents. #TimeisNow for shared responsibilities at home.

On March 8th, let us also not forget that we all have to take action to eradicate one of the gravest human rights violations of our time – violence against women and girls. In a survey carried out by the National Bureau of Statistics and the United Nations, 63% of women said that they have experienced at least one form of violence (psychological, physical, sexual) from husband/partner during their lifetime. At the same time, many women do not speak up or seek help when they experience harassment or violence – be it at home, on the street, at the workplace, on the internet, or in other settings. Violence against women and girls is not inevitable. There are many ways to prevent it in the first place and to stop cycles of violence repeating. Moldova has adopted important legislation in this respect and the first-ever National Strategy to prevent and combat violence against women and domestic violence 2018-2023 was approved by the Government last month.

For these to make a difference and not stay on paper, each and every one of us, men and women, has a role to play - to speak out against harassment and violence in our homes, workplaces, in our institutions, social settings and through our media. To instill the principles of equality, rights and respect as we raise our sons and daughters and educate them in schools. And for those who make and monitor policies and work in the health, social care, police and justice sectors - to ensure that survivors have access to services that are comprehensive, multi-sectoral, non-judgmental, of good quality and accessible to everyone, with no exceptions. The time for a happier life, free from any form violence, for every woman and girl is also right now.

UN Women will continue supporting the Moldovan government, civil society and citizens in making further progress on all of these issues. This week, we launched a campaign that celebrates women who have “made history” in the country – they are firsts, pioneers in their fields. Years ago, as they entered entirely male-dominated fields, such as science, sports, politics, business, and others, many of them faced unprecedented challenges. In 2018 the situation is different. Yet, we have more to do if we want by 2030, the date by when the Sustainable Development Goals should be achieved, to have a world that is equal for all, and no-one to be left behind.On International Women’s Day, we salute the women activists whose passion and commitment have won women’s rights over the generations, and successfully brought change. We hope that many more men and women, will actively join the global movement for women’s rights, equality, safety and justice, because #TimeisNow.

Related News
28/02/2022
Statement by UN Women Executive Director Sima Bahous on Ukraine
25/05/2018
“Harnessing the full potential of women and men leads to a substantial economic growth of the country”
30/04/2018
Dads from Moldova and Sweden: A photo exhibit that challenges stereotypes, showing men alone with their kids
05/03/2018
UN Women Moldova launches the campaign “You Know You Can”
19/02/2018
Dads from Moldova and Sweden photo contest was launched in Chisinau
END_OF_DOCUMENT_TOKEN_TO_BE_REPLACED