Interview with Lilia Pascal, Head of Division of policies for ensuring equality between women and men, Ministry of Health, Labor and Social Protection 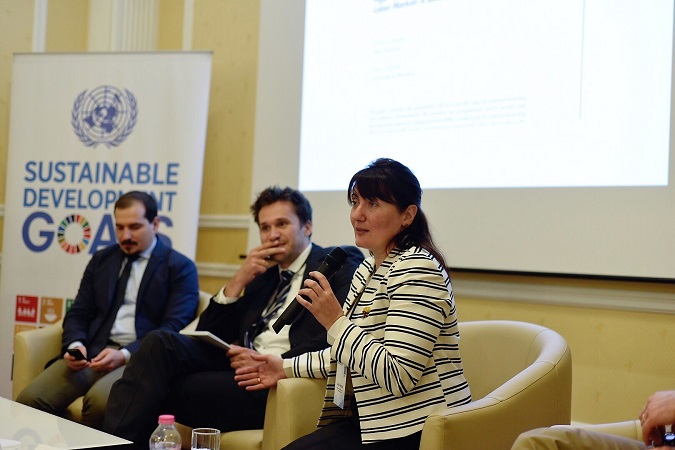 During January - May 2018, UN Women Moldova, together with the Partnership for Development Center and the Ministry of Health, Labor and Social Protection (MoHLSP), organized the ‘Support for Gender Coordination Groups’ Program. Implemented with the financial support of the Swedish Government, the program aimed to increase capacities to perform policy analysis from a gender equality perspective. The expected results are as follows: five designated ministries draft or finalize specific plans to implement the Gender Equality Strategy, carry out gender analysis of emerging policies and develop specific recommendations for gender mainstreaming based on the analysis. More, the ministries should develop an annual action plan for gender units/gender coordination groups. To find out about the impact of this program, UN Women talked to Lilia Pascal, Head of Division of policies for ensuring equality between women and men, Labor and Social Protection, who has a central role to coordinate the mainstreaming of gender equality within Government structures. Pascal participated in the ‘Support for Gender Coordination Groups’ Program.

- Why is it important to mainstream gender into the public policies?

- The importance of gender mainstreaming in the policies stems from the fact that gender equality is a fundamental human right, recognized both nationally and internationally. In an international context, we have the treaties that have been adopted and proposed to the States for signature and ratification, the relevant guidelines and recommendations, and a complex set of tools that promote gender equality and women's rights as a whole. On the national level, by ratifying the Convention on the Elimination of all Forms of Discrimination against Women in 1994, the Republic of Moldova committed to promote a policy of eliminating discrimination against women. Moreover, the Government committed to implement the 2030 Agenda for Sustainable Development, which includes specific targets aimed at reaching a Planet 50-50.All these commitments can be achieved by mainstreaming gender equality in all public policies and programs, so that the Government has information on the needs and impact assessment for women and men throughout the entire cycle of policy development, implementation and monitoring, and is able to act on the needs and aspirations of both women and men.

- What actions should be taken to mainstream gender equality at all stages of the public policy cycle?

- First and foremost, initial and on-going training on gender equality should be provided to all civil servants, from both central and local authorities. Policy development rules should be then reviewed and standardized, with mandatory inclusion of a gender equality objective for each sector, as well as gender-sensitive indicators that would allow measuring the impact of the respective public policy.

And last but not least, the political will to promote a gender equality agenda, ensuring a mechanism for monitoring the implementation of the relevant regulatory and policy framework, including through gender responsive budgeting.

- What are the challenges of mainstreaming gender into public policies?

- A major gap is the lack of sectorial studies that could highlight the problems and shortcomings in each area. Then, it is necessary to include initial and ongoing training of civil servants at different levels (central and local). The lack of gender-sensitive objectives and indicators in sectoral budget programs is also a challenge.

- Why is such a program necessary for representatives of the gender coordination groups from the ministries?

The public policies in this field are under the umbrella of the new Gender Equality Strategy of the Republic of Moldova for 2017-2021, which presents an analysis of the situation, the problems in this area and guides the Government’s efforts towards concrete objectives, meant to overcome the identified problems and ensure de facto equality between women and men in the country.

At the same time, the Strategy is the mechanism per se for accomplishing the international commitments assumed by ratifying the relevant treaties, implementing the recommendations submitted to the Government by the UN Specialized Committee and the national consensus of governmental stakeholders and civil society to achieve gender equality by joint efforts.

One of the overall objectives of the Strategy is to strengthen the institutional mechanism in this field. It envisages a series of activities via the platform of gender coordination groups, both in terms of strengthening the capacities of their members and capitalizing on the contribution of each public policy sector to achieving the general objectives of the Strategy.

- What would the life of women and men in the Republic of Moldova look like if gender equality was mainstreamed in public policies?

- If gender was mainstreamed into the national public policies, we would have had equality between women and men, as we want to, and this would have implicitly lead to the exclusion of some negative phenomena we are facing today, such as violence against women and domestic violence, trafficking in human beings, discrimination against women, etc. Harnessing the potential of women and men leads to a substantial economic growth of the country and well-being of its citizens.

- Thank you for offering this interview!

Related News
24/11/2022
The UN and the Government signed the Sustainable Development Cooperation Framework 2023-2027
28/02/2022
Statement by UN Women Executive Director Sima Bahous on Ukraine
30/04/2018
Dads from Moldova and Sweden: A photo exhibit that challenges stereotypes, showing men alone with their kids
08/03/2018
Op-ed: Time is now for justice and gender equality
05/03/2018
UN Women Moldova launches the campaign “You Know You Can”
END_OF_DOCUMENT_TOKEN_TO_BE_REPLACED