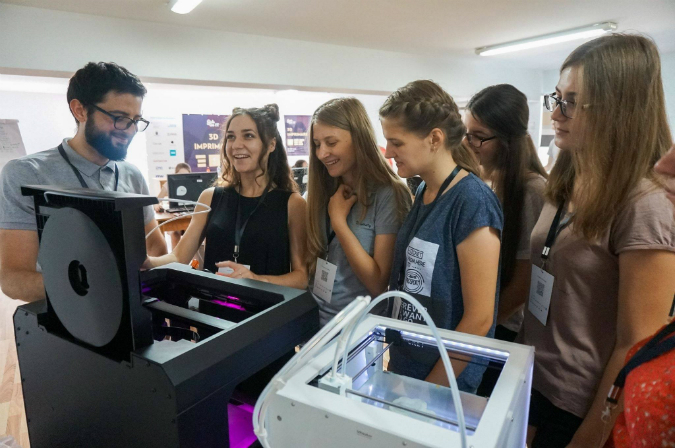 Most girls interacted for the first time with a 3D printer to print their designs, wrote code for a robot, and created their first Web pages.

I used to think I was not good at technologies. But my classmate Vlada convinced me that I could do it,” said Sabina, one of the participants.

This technology is the future. I think every girl and every woman has huge potential. Why not learn it if they want? In the end, we are all equal and the differences between men and women are not so big,” said Marița, another participant.

Ileana Crudu participated in an earlier edition of GirlsGoIT, which determined her to choose technology as her career path. Now she studies Artificial Intelligence at Maastricht University in the Netherlands, one of the few female students in her class, and is a mentor for the participants of this year's summer camp.

“GirlsGoIT has led me to choose technology for my career and now I want to contribute to the development of other Moldovan girls. I will do my best to empower the 65 participants of the summer camp,” said Ileana.

This is the first summer camp edition that includes other disciplines alongside information technology, such as robotics and 3D printing. The girls also had a session on women's rights and preventing cyber violence.

We are convinced that this year's edition brings us closer to GirlsGoIT’s mission: providing girls with access to, and education in, technology,” said Mihaela IURAȘCU, GirlsGoIT’s program coordinator.

In the fields of STEM (Science, Technology, Engineering, and Math) there are still enormous obstacles that bar women and girls from fully participating. Through this initiative (GirlsGoIT) you can demonstrate that technology is for girls!” said Ulziisuren Jamsran, UN Women Representative in Moldova, to the participants.

GirlsGoIT was launched on March 27, 2015, and aims at empowering young Moldovan women in STEM (Science, Technology, Engineering, and Math) fields. GirlsGoIT platform is present in 11 regions of the Republic of Moldova and is supported by UN Women Moldova, the Swedish Embassy in Moldova, the Swiss Agency for Development and Cooperation, Google, USAID Moldova, Moore Stephens KSC, Spark Research Labs, and TEKEDU. The training partners are: Technical University of Moldova and Atelier 99.

Related News
27/12/2022
Valentina Buhnă, founder of Flavorya, on being an entrepreneur and the unusual tastes of dried fruits
28/09/2022
Ten Moldovan women entrepreneurs receive 60,000 MDL each to develop their businesses
26/09/2022
Seventeen Moldovan companies sign Women's Empowerment Principles
16/09/2022
National Conference on Women’s Economic Empowerment: “Empowering Women in the Workplace, Marketplace and Community”
22/08/2022
A new edition of "Discover Modova's Finest" brought together representatives of Diplomatic Missions, entrepreneurs and fashion designers from the Republic of Moldova
END_OF_DOCUMENT_TOKEN_TO_BE_REPLACED