Diana Crudu: “If tomorrow women refused to harvest, to tie the vines, to milk, the entire agriculture of the Republic of Moldova would be paralysed”

Almost all over the world, agriculture is associated primarily with women. According to global reports by the Food and Agriculture Organization (FAO), the majority of women from developing countries who are directly involved in the economic sphere are agricultural workers. But despite this, women face systemic gender-based obstacles that limit their opportunities to start their own businesses, putting them at a disadvantage compared to men. 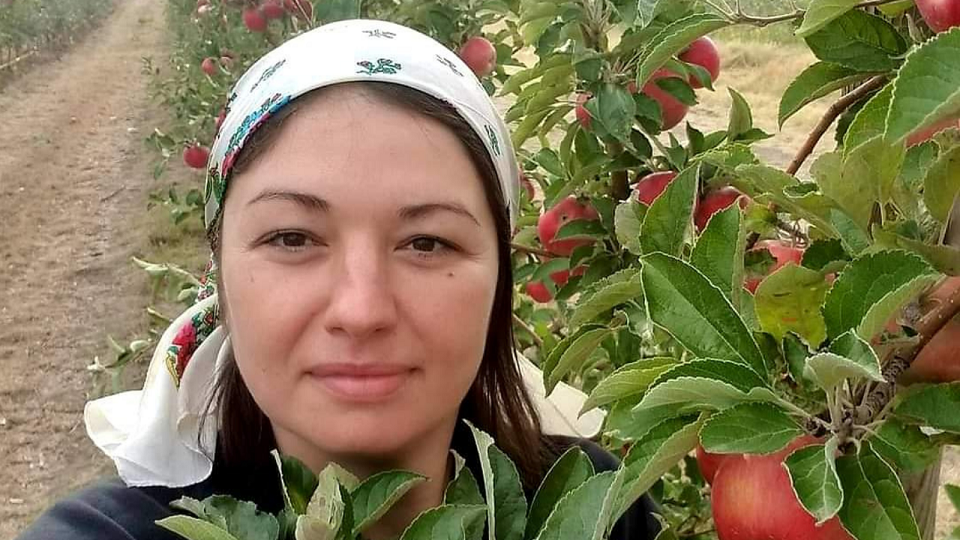 Diana Crudu. Credit: Personal Archive
In the Republic of Moldova, women from rural areas are one of the most affected groups in terms of volatile economic conditions. According to national research conducted in 2016, women are the most susceptible to changes in economic and social fields, being directly influenced by systemic inequalities that favour men. Nevertheless, women are resilient and ambitious in promoting gender equality and fighting for the creation of a prosperous economic environment for all citizens of the country. One of these women is Diana Crudu.

The entrepreneur decided to come back to the Republic of Moldova after completing her economics studies abroad in Romania, the Netherlands and the United States. Her decision was influenced by several factors, one of them being her interest in working with her mother at her parents’ vineyard. “I offered my support for the things I am good at: Harvesting, tying, all processes women were being involved directly (...) Since 1940, no man was born in our family – all men came to our family via marriage. (…) I knew that at the age of 18 I had to obtain my driving license if I had to drive a tractor. If we have to learn about the chemical composition of sprinkling, although we have no idea about it, we will learn about it, even though we make mistakes,” says Crudu.

When Moldova’s grape market got oversaturated, Crudu re-examined the situation of women agricultural entrepreneurs and their needs. “I was frustrated because although my mother used to produce quality vines, at some point, the market got oversaturated. We used to sell grapes for 5–6 Moldovan lei (0.2-0.3 Euros), while on the European market they cost 1 Euro,” she explained.

This situation persisted and in 2018 Diana decided to encourage people to buy more fruit and show solidarity towards the women and men working in the agricultural sector.

“I was happy to see that people were mobilized and, in three weeks, I sold 60 tons of grapes. I finally saw my mother sleeping after several months of sleep deprivation. But still, it is hard for women to enter the agricultural market of the Republic of Moldova. They face many challenges in this field. More than 50 per cent of Moldovan agricultural workers are women. If tomorrow they refused to harvest, to tie, to milk, the entire agriculture of the Republic of Moldova would be paralysed,” Crudu added. 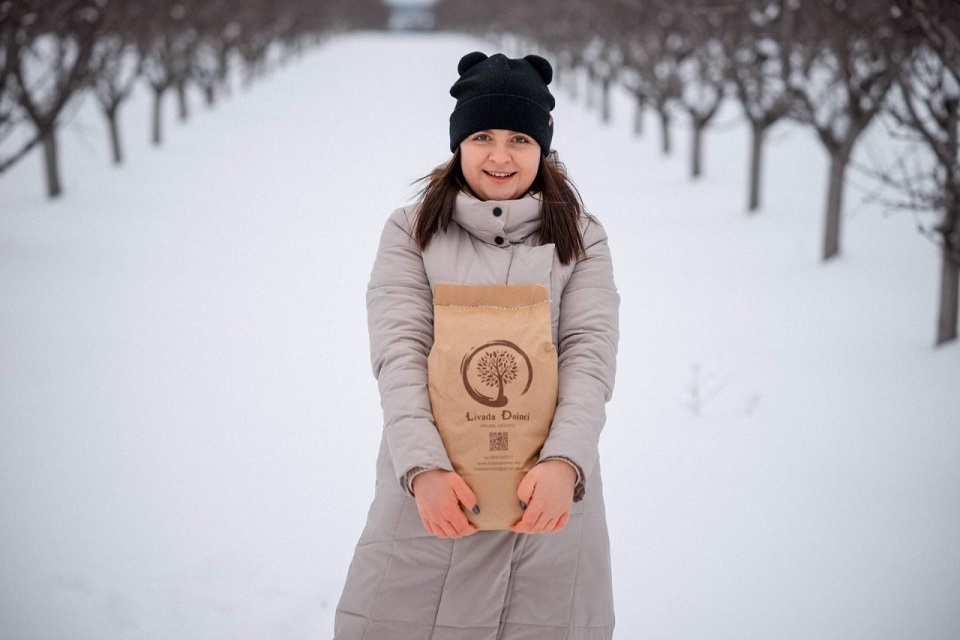 Doina Grati, entrepreneur, holder of a plum orchard. Credit: agroexpert.md
To establish an equal balance between men and women in agriculture, Crudu mobilizes more women to become active, to hold leadership positions and to share the domestic work with their male partners. As the majority of business-owners are men, Crudu believes that it is important for more and more women to get support from initiatives and support groups to start and develop businesses in Moldova. She also envisioned achieving this through fairs and events where women entrepreneurs are the priority.

“We were eight people at the first event – seven of us being women. Not so many people believed that this event would be a successful one but I believed that people would be willing to support local producers. I have organized events in Chisinau as well, in the city centre. In 2019, I organized a fair of sweet gifts for women. Subsequently, I organized a series of events where I helped berry-growers sell many tons of berries,” Crudu mentioned. 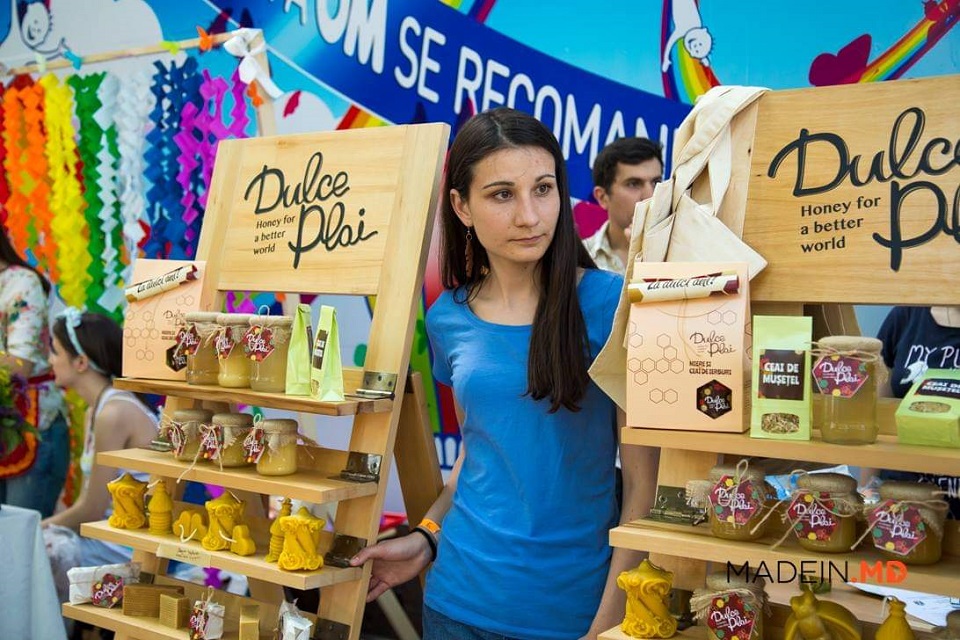 Liza Mamaliga, beekeeper. Participant in the social entrepreneurship program „Dulce Plai”. Credit: Madein.md
In 2021, Crudu, together with other women entrepreneurs, managed to organize a fair involving 75 people. The fair was organized respecting all COVID-19 protective measures and social distancing.“We gathered 75 local producers – 95 per cent of whom were women,” she says. “Moreover, we received 15,000 lei [USD 850] from the National Farmers’ Federation. Also, we managed to create a catalogue of women producers. It is not the biggest victory but I believe that if today I do something good, maybe it will inspire other people to do something good in their communities.”

The experience Crudu gained in organizing these events helped her understand an important barrier to the activities carried out by Moldovan women entrepreneurs: the lack of digital education, which has become especially important in a COVID-19 world. “I noticed that people from the region do not have a good understanding of digital tools that could help them promote their products. There’s a need for education in this context: how to promote your products. This is what small businesses managed by Moldovan women miss. I try to help them in any way I can,” adds the entrepreneur. 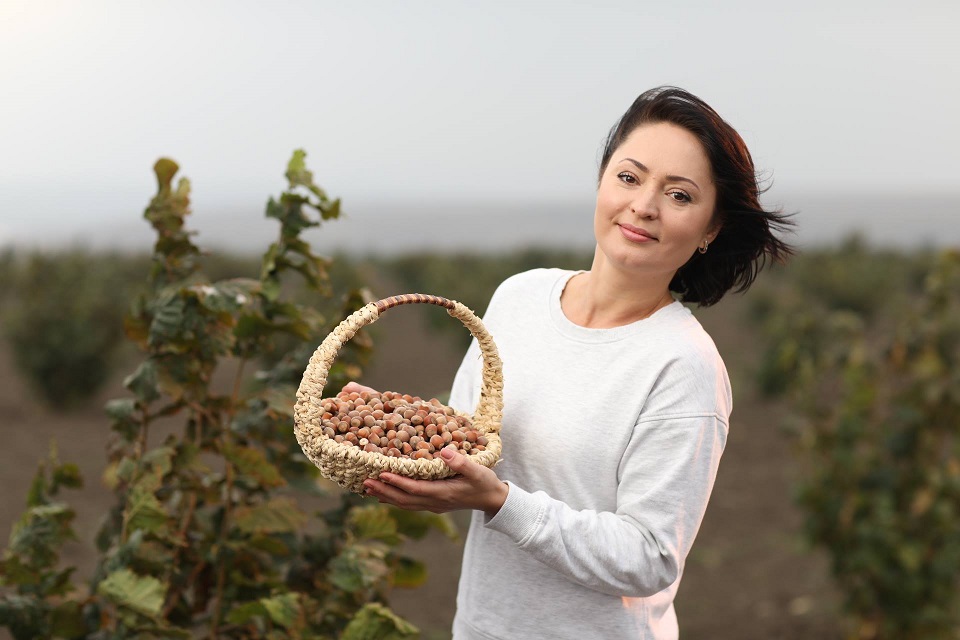 Svetlana Nițoreanu, entrepreneur, holder of a hazelnut orchard. Credit: EcoLocal
In March 2021, UN Women celebrated women leaders from their communities and women who manage to encourage the exponential growth of women’s engagement in social, economic and political life. This happened in the context of International Women’s Day 2021, under the theme “Women in Leadership: Achieving an equal future for all in a COVID-19 world,” which celebrated the tremendous efforts made by girls and women all over the world during the pandemic.
Related News
27/12/2022
Valentina Buhnă, founder of Flavorya, on being an entrepreneur and the unusual tastes of dried fruits
28/09/2022
Ten Moldovan women entrepreneurs receive 60,000 MDL each to develop their businesses
26/09/2022
Seventeen Moldovan companies sign Women's Empowerment Principles
16/09/2022
National Conference on Women’s Economic Empowerment: “Empowering Women in the Workplace, Marketplace and Community”
22/08/2022
A new edition of "Discover Modova's Finest" brought together representatives of Diplomatic Missions, entrepreneurs and fashion designers from the Republic of Moldova
END_OF_DOCUMENT_TOKEN_TO_BE_REPLACED