Known for establishing M.A.D.E. theatre and staging social performances, Ianos Petrascu is the stage director who addresses social issues in a different way. Together with his theatre crew, he had traveled for 6 months throughout the Republic of Moldova, staging the ‘Free’ (Libera) play in 16 localities and raising thus the issue of violence against women and how this phenomenon impacts the future generations.

Ianos Petrascu’s journey into the world of art started from the dream to become an artist, to the opportunity to teach others the profession of acting and directing and to finally set up his own theater, different from those the audience was accustomed to so far. 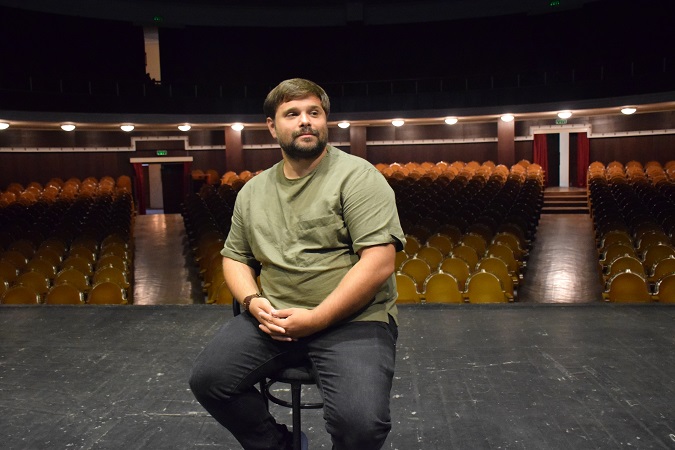 ‘In fact, I liked everything that happened on the stage since early childhood, and, as any adolescent or young man, I had a dream – to become an artist. There were very few ways that could have led me to the stage, one of them was to become an actor. I was very lucky because my teacher of theatre encouraged me to enroll in the directing department after graduating from the high school. That is how I came, so to say, to swim in the waters of theatre directing. Since then, I have begun to fall in love (with theater)’.

In the light of his experience at the Academy of Music, Theater and Fine Arts and understanding that he wants to create a theater different from those existing in the Republic of Moldova, the artist, together with a few of his colleagues, decided to stage his own performances, where he addresses the corporality and talks with the audience in a different way.

‘Everything happening in the Moldovan artistic area is related to the drama theater, failing to address the corporality. This got me thinking, and, at the same time, I did not manage to find a troupe where I could express myself how I want. That is why together with several colleagues I decided to set up the M.A.D.E. theatre, where we can talk with audience in a different way, using our bodies. In fact, this is also our theatre’s motto: ‘a theatre where the actor’s body speaks’.

The actors’ job is not a simple one in such a theatre. Besides being able to express the emotions experienced by their characters, actors must do it without saying a word. At the same time, actors must be able to juggle with their body, mastering dance, ballet, pantomime, acrobatics and other techniques on which physical theater is built, creating a universal space recognised by any audience.

‘This allows us to perform for audiences of any religious or political believes, or any different cultures around the world. I had pondered over this idea for a long while, but I did not know with whom to start. In October 2015 we launched M.A.D.E. with ‘Checkmate’ — a colorful performance that addressed the issue of thirst for power. We were very happy about the answer we received from the audience because people said that as the performance was beautiful, so thoughtful you were when leaving the theatre. Then we realised that theatre, in fact, is meant to ask questions and educate the audience. By doing so we could urge spectators to change something both in their inner and outer world, creating thus a healthy society.’

The experience of writing the script for ‘Free’ (Libera) and staging the play with the actors’ crew made Ianos understand how widespread the phenomenon of violence really is. 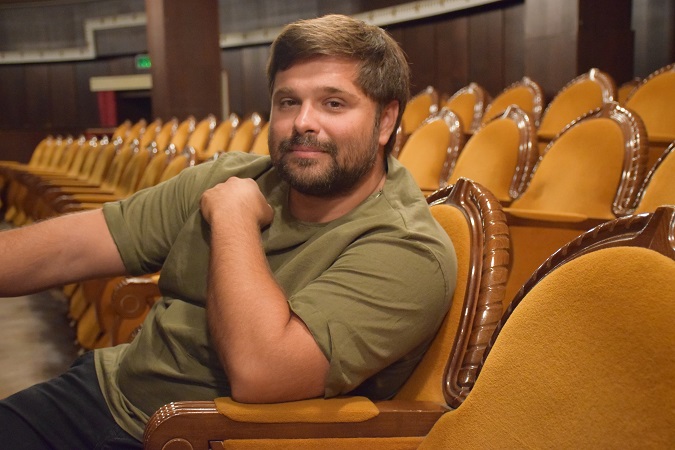 'We realised that theatre, in fact, is meant to ask questions and educate the audience.' Credit: UN Women Moldova.

‘After I realised that theatre, in fact, is intended to educate the audience, I discussed with some of my colleagues about another common phenomenon. They told me many experiences from their childhood, some pleasant and many unpleasant. Sometimes I also remembered my past and then said that it would be appropriate to talk about it on the stage, as an artist. After each discussion I had with my colleagues, who told me about scenes of violence, I asked them if they have changed over time, if they could be different after the experience they had. They told me ‘no’, because they did not know how to be different. Then I understood that, regardless of whether we want it or not, we follow our parents’ lead, and in order to change ourselves, to be able to break these stereotypes, we need to make a 90-degree turn from the flow that takes us in the same path. When trying to talk about what happened to us when we were young and how this impacts children, I understood that people tend to skip some things or very few talk about them. Why? Because they feel ashamed, having been taught since childhood not to speak publicly about such things because it is very embarrassing. A stereotype was created, which took root so much so that it became a normality. At some point, these moments of normality no longer stand out.’

While studying and getting in touch with their characters, Ianos and his fellow actors understood better what people affected by violence truly feel.

‘When putting up a play, whether you want it or not, you have to experience all the feelings. The actors who played on the stage are actually professional dancers, who had some small encounters with acting at certain points in their lives. They knew what it meant to be a dancer, go on stage and perform some choreographic moves, but it's something else when you have to walk in the shoes of a character and experience their feelings. And at some points, some of them were simply frightened by what they saw. Some of them once said, ‘I also felt it’, ‘I have seen that myself’, ‘I do not want it to happen again’. Stefan, the actor playing the father, left the stage after one of the rehearsals and no one saw him for about 10 minutes. I did not know what had happened to him. He was crying. When I asked him why, he replied ‘Why do such things happen in the society?’. 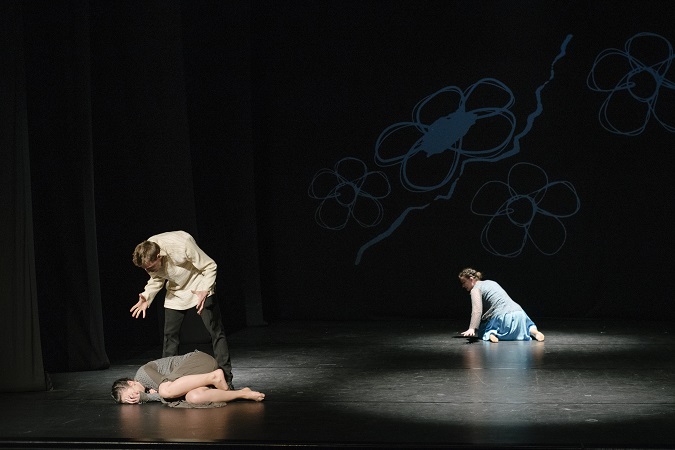 Getting ready for the ‘Free’ performance was a long and tedious process, especially since I am a man and few women trusted me enough to speak about their experience. I used to ask them what happened and how, but women were reluctant to talk to me. They were either afraid, did not trust me, or regarded me as a stranger ‘not belonging to our group’.  One of the women once told me ‘anyway you will not believe what I'm going to tell you’. Others said, ‘Why should I tell you, will this change something?’. Then I understood that some of the women were afraid to talk, others understood their inability to fight the windmills alone and resigned to their situation (of violence), accepting these rules of the game and continuing to subsist. The story of our character is exactly of this kind — the story of a lady who at a certain moment resigned. She could not truly live her life but simply existed near such a person. It was very difficult for us to prepare for ‘Free’ because women were afraid to talk. But I was glad that some of them were open right from the start. One of them said, ‘I am happy that at least men are starting to pay attention to us’.

After each performance, held in 16 localities in the Republic of Moldova, the audience had the opportunity to participate in public discussions on the issues addressed by the play and to analyze the violence phenomenon from the perspective of both women and men. 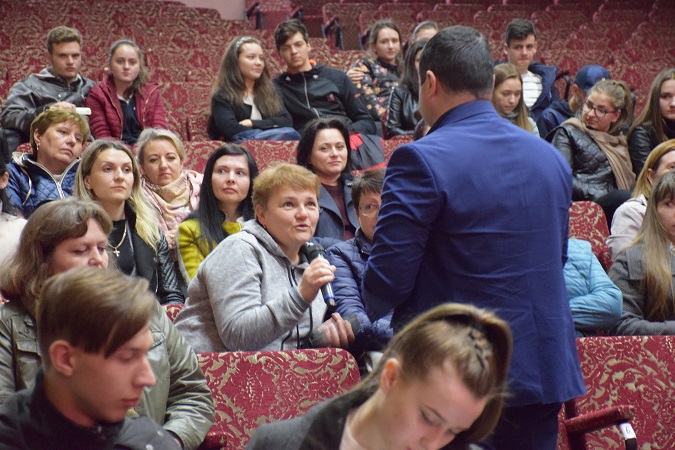 ‘I’ve noticed that when entering the theater hall, the audience has the feeling of returning to school for another lesson, wondering ‘What are they going to tell me now?’. But this feeling changes during the play and we see how much the audience empathizes with the actor/actress on the stage.

Unfortunately, we had very few cases of boys speaking about the violence they face. Why? First, because of the stereotype that exists especially in Moldova: if a man confesses publicly that he encountered situations of violence, people will regard him as weak. For the society this is a moment of weakness. But I think this is wrong, because each of us has the right to talk, to say ‘I was assaulted’. As a rule, men find it harder to talk about it. I think that's why we divide ourselves, wrongly in my opinion, into the beautiful and strong sex - that is, those who can not allow anyone to make them feel otherwise than powerful. Initially few people raised their hand when asked after the play who was facing violence, or had witnessed or experienced a scene of violence. After the third play, the audience changed, but I can not say that about boys. Men do not talk about this.’

For now, M.A.D.E. finished its ‘Free’ tour, but this does not mean that they stopped talking about the problems encountered by our society. Their crew will start soon working on a new theater play.

‘I think it's possible to change people's prospects. Even if a woman wants to have the same chances as a man, who forbids her to be feminine? Who says that if a woman is strong she is no longer beautiful, and why a man must be very strong? Only he must become a boss? I do not think people can be categorised. There is nowhere written that the man has the supremacy, and the woman must be behind him. This stereotype was invented once, I do not know why. Men used to go to wars, and women used to wait for them at home, but can we put on the same scales what men did on the battlefield and what women did at home?

So far, I’ve tried with my crew to tackle issues that we care about. During any performance we find other issues that we would like to address, which, whether we want it or not, also highlight the issue of violence. We want very much to talk about an important and current, but sensitive topic for Moldova — interethnic solidarity.’

The ‘Free’ (Libera) play was staged for the first time in Chisinau on 3 December 2018, with the tour ending on 8 May 2019 in Rezina. The play was produced by MADE Theater (Movement, Art, Dance and Emotion) in partnership with Vesta NGO and UN Women Moldova, and funded by Sweden.

Domestic violence and violence against women are one of the most serious forms of human rights violation. In the Republic of Moldova, domestic violence is recognized as a crime and is punishable under the Criminal Code. According to statistical data, 6 out of 10 women experienced at least one form of physical, psychological or sexual violence during their lifetime.

Related News
24/01/2023
Promoting healthy family dynamics in Moldova through education
10/12/2022
Push forward: 10 ways to end violence against women
01/12/2022
Dialogue held on access to justice for women survivors of gender-based violence
18/04/2022
Artemida Drochia
10/12/2021
Art therapy: 5 pieces of art made by survivors of domestic violence, exhibited at the Parliament of the Republic of Moldova
END_OF_DOCUMENT_TOKEN_TO_BE_REPLACED