Virtual reality applications are popular for 3D games, but more and more they are effectively used to train first responders in emergency situations, medical professionals, aviators, military staff and others. As part of its innovation initiatives, UN Women Moldova is testing the use of virtual reality to train police officers for an efficient response to cases of violence against women. To find out more about the use of virtual reality in solving social issues, we spoke with Bjorn Bakken, Associate Professor at Inland Norway University of Applied Sciences, the head of the bachelor’s program in crisis management and preparedness. Bjorn has been working with UN Women Moldova since 2016 to include innovative approaches in our work. The development of the virtual reality prototype for police training is supported by Innovation Norway and Government of Sweden. 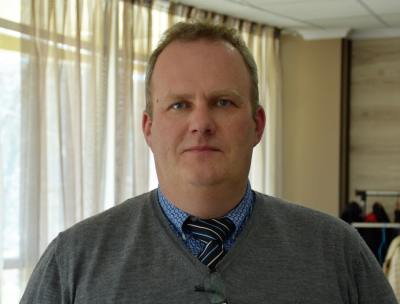 How can virtual reality applications help solve social issues such as ending violence against women?

First of all, it is cost effective. Once you have made the application then you can distribute it to any number of users, as long as they have a phone. Also, it provides you an opportunity to learn by doing. That’s a psychological thing. It means that the best way to learn something practical is to actually do it. And a cheap way to do is to simulate. You get choices and on the choices, you get feedback, if you make a good choice you get good feedback, and if you make a bad choice you get bad feedback. You also get suggestions how to improve the next time and you also get motivated.

Has anything like this been done to solve similar issues around the world?

I know an example from Norway, they have done a 360 degrees video screen used in psychiatric hospitals for treatment of patients who are violent. They train the nurses with this application. It shows how to calm them down. They have good results. Also, there are trainings for sales people, you can increase sales by having people take courses with the virtual reality.

How new is this technology?

It has existed for 20-30 years, but in the last five years, this equipment has become available to anyone who has a smartphone. You can also buy these more expensive glasses, and then you don’t need a computer, you just need the glasses and then you can walk around in the virtual reality. For example, one simulation is for crisis management organization. The simulation is to handle a crisis where the cruise ship, which have fire on board, and they have to extinguish the fire at the same time as they have to evacuate all the passengers. You have helicopters, ambulance, police, ships and it’s all in virtual reality. It’s a team training, they have headphones, radio, so they also have voice communication.

How innovative it is to apply virtual reality to an old social issue like ending violence against women?

I think that’s really innovative. I don’t think it has been done before. That’s why we got funding from Innovation Norway for the prototype.

If tested successfully and developed, what would the application look like?

We would first have scenarios, then build the applications that anyone can use with these special glasses. We would also need a training handbook, so that it’s not just the application, it’s a training program.

These types of applications help you learn, and also help develop the sense of empathy. It is all related to reward mechanisms. A good feeling that you made the right choices is a reward mechanism that stimulates you to do the good thing next time as well.

During the workshop on April 3rd, representatives of Police, Government, Civil Society and technology experts have discussed the testing of Virtual Reality in first responders’ training for interventions in cases of domestic violence in Moldova. Also, they identified and role-played a few police intervention scenarios that will be used for further development of the VR application.

Related News
24/01/2023
Promoting healthy family dynamics in Moldova through education
10/12/2022
Push forward: 10 ways to end violence against women
01/12/2022
Dialogue held on access to justice for women survivors of gender-based violence
18/04/2022
Artemida Drochia
10/12/2021
Art therapy: 5 pieces of art made by survivors of domestic violence, exhibited at the Parliament of the Republic of Moldova
END_OF_DOCUMENT_TOKEN_TO_BE_REPLACED