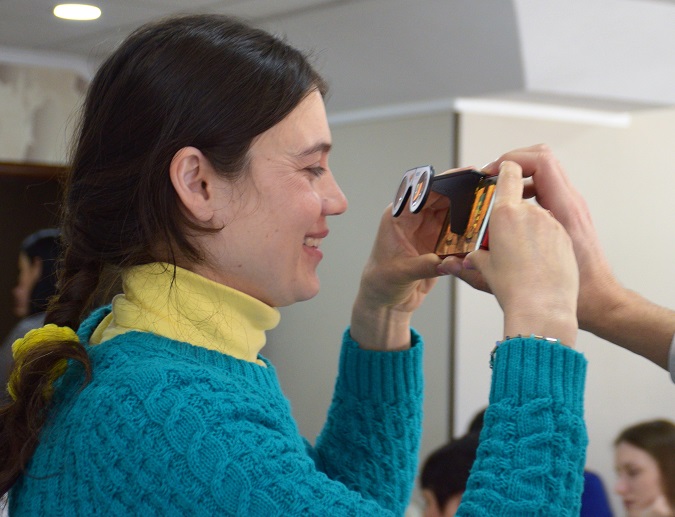 Did you know that virtual reality applications are effective training tools especially for response to emergency situations?

As part of its innovation initiative, UN Women Moldova tests the use virtual reality tools for police training for effective response to cases of violence against women. This initiative is in partnership with Inland Norway University of Applied Sciences and Eon Reality, and with the participation of first responders and other professionals from relevant institutions.

During the workshop on April 3, mixed groups of participants through role playing illustrated positive and negative behaviors of police officers in various situations response to violence against women, such as during patrolling, when talking with perpetrators, in their work with shelters for victims of violence, when giving restraining orders, and in other situations.

Based on the identified positive and negative attitudes and behaviors, a prototype virtual reality application that will look like a 3D game will be developed. Through special glasses and application that simulate real-life situations, police officers will be able to train and receive feedback on their decisions.

“This is a very innovative initiative, I don’t think it has been done before. It's a powerful training method that provides you an opportunity to learn by doing. Once you have made the virtual reality application then you can distribute it to any number of users, as long as they have a phone, which makes it cost effective” said Bjorn Bakken, professor at Inland Norway University of Applied Sciences (INN). 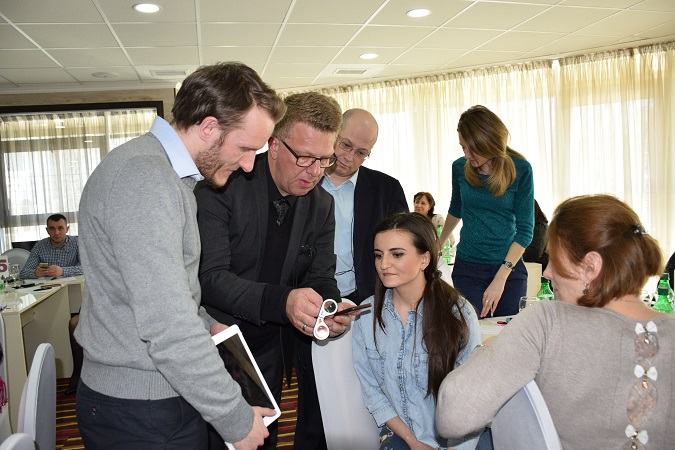 The participants were eager to test the virtual reality equipment and applications.

“It’s very interesting. I’m curious how virtual reality is going to be used for training,” wondered Maria Scorodinschi, positive champion in ending domestic violence, during her first interaction with a virtual reality application.

“Such training approach based on concrete situations will give police officers a better understanding of how they should act,” said Ghenadie Neamţu, chief of the Public Security Department of the General Police Inspectorate.

The workshop gathered representatives of the General Police Inspectorate, the Ministry of Health, Labor and Social Protection, the Ministry of Education, Culture and Research, the National Bureau of Statistics, Moldcell, ATIC – Moldovan Association of ICT Companies, international organizations, organizations working in the field of women's rights and ending violence against women, positive champions - women who have overcome violence, and partners from Inland Norway University and Eon Reality.

Virtual reality applications have been successfully used to train professionals in various areas, such as emergency and rescue interventions, piloting, military operations, medicine, and more.

See the interview with Bjorn Bakken, Associate Professor at Inland Norway University of Applied Sciences: “Virtual Reality could bring new solutions to issues such as ending violence against women”.

Since 2015, UN Women in Moldova has introduced internationally recognized innovative approaches in its work. One of them is the positive deviation approach, which is based on the observation that in every community there are people or groups who found solutions to common problems. UN Women Moldova and its partners identified positive champions and empowered them to act as leaders of change and to help others apply those solutions.

As a result, in 2016, 44 positive champions who had succeeded in overcoming violence were empowered to share their stories and help other 1,000 women take the first steps towards a life free of violence. In this way, UN Women in Moldova managed to significantly increase the number of women who know their rights and seek support services from local authorities. In 2017, with the participation of positive champions, 16 multidisciplinary teams went through a role-clarification exercise and developed 16 recommendations to be included in the guidelines for the multidisciplinary teams on combating domestic violence.

Related News
20/01/2023
Women’s organisations in Moldova receive funding to respond to the humanitarian crisis
19/10/2022
Tech Women Summit, the platform dedicated to women of any age who work in IT or want to pursue IT careers
29/09/2022
The local socio-economic inclusion mechanism of women survivors of domestic violence was created, tested and piloted in Cahul and Ungheni
06/04/2022
Svetlana Patras, a referee and trainer: “True football means passion, movement and, of course, team spirit”
30/03/2022
gender sensitive budgets
END_OF_DOCUMENT_TOKEN_TO_BE_REPLACED