We have abilities, we want possibilities! The program to support more women with disabilities to enter in politics was launched 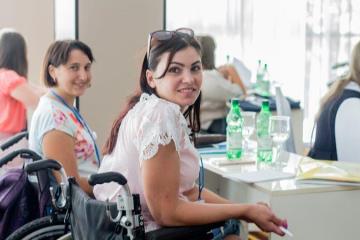 Participants at the program „We have abilities, we want possibilities”. Photo: UN Women/Vlad Andreev

The Program for enhancing the political and civic participation of women with disabilities in Moldova "We have abilities, we want possibilities!" was launched, for the first time, in Chisinau. 40 women with disabilities from different regions of the Republic of Moldova, including from ATU of Gagauzia and left bank of Nistru river took part in the first session of the program.

During the project, women will strengthen their leadership skills and will consolidate their knowledge in gender equality, advocacy, community and voter communication. More, they will learn how to promote their priorities in decision-making processes at national and local levels and how to develop and use legal instruments, as petitions, statements etc.

Irina Revin, chairwoman of the Association of Entrepreneurs with Disabilities, said that out of 184,000 people with disabilities, almost half of them are women. "Unfortunately, however, and too often, they are poorly represented in decision-making processes. Therefore, this program is an opportunity for girls and women with disabilities to make their voices heard at local and national level, as well as to fully exercise their political, social and economic rights," pointed out Irina Revin.

Asya Varbanova, programme coordinator UN Women Moldova (United Nations Entity for Gender Equality and Women's Empowerment), stated: "You are the agents of change in Republic of Moldova. We want to see women with disabilities in Parliament and in local councils. We believe that it is a reality. And even if you are not in Parliament or the local council, we hope you will be active citizens with civic spirit. And we are here to accelerate this process".

Olga Ciubotaru, one of the participants from Drochia city, said that, after completing this program, she wants to become more active and involved in decision-making processes in her native town. "We do not want to be perceived as women with disabilities, but as women who have an opinion and have the right to participate freely in any decision that affects our lives directly or indirectly," said Olga Ciubotaru.

In the end of the first session, the women discussed with Ulziisuren Jamsran, country representative of UN Women Moldova, during which they talked about the challenges they face day by day, but also which are their future plans after graduating the program. In turn, Ulziisuren Jamsran thanked them for openness and presented the mandate of the organization.

The project runs from June to October 2017 and consists of four stages, namely, trainings, including visits and discussions with representatives of the Government and Parliament of the Republic of Moldova and public institutions, as well as exchanges of experience with successful women from Republic of Moldova. Then will follow the mentorship stage, where the participants will examine case studies, considering the lessons learned and their experience, supported by mentors. And the latter stage will be the awareness raising campaign, which aims to increase the tolerance of society towards women with disabilities and their involvement in the social, political and economic aspects of life.

The program of strengthening the leadership abilities of women with disabilities "We have abilities, we want possibilities!" is implemented by the Association of Entrepreneurs with Disabilities "European Skills without Borders", with the support of the UN Programme “Women in Politics”, implemented by the United Nations Entity for Gender Equality and Women's Empowerment (UN Women) and the United Nations Development Program (UNDP), in partnership with the East European Foundation and the Partnership for Development Center, financially supported by the Government of Sweden.

Related News
23/10/2017
Women with disabilities from Moldova demand their place in political, economic and social decision-making
24/01/2023
Promoting healthy family dynamics in Moldova through education
20/01/2023
Women’s organisations in Moldova receive funding to respond to the humanitarian crisis
27/12/2022
Valentina Buhnă, founder of Flavorya, on being an entrepreneur and the unusual tastes of dried fruits
10/12/2022
Push forward: 10 ways to end violence against women
END_OF_DOCUMENT_TOKEN_TO_BE_REPLACED