What do young people demand for achieving gender equality and why do we need a more inclusive society. Learn more about the young participants of the first two editions of Gender Debates Café ​

The young people who participated in the first two editions of Gender Debates Café organised during March, are promoters of feminist values, actively working on the implementation of projects facilitating ideas exchange, enhancement of feminist movements image and the necessity to make them more visible both in their communities and at national level. 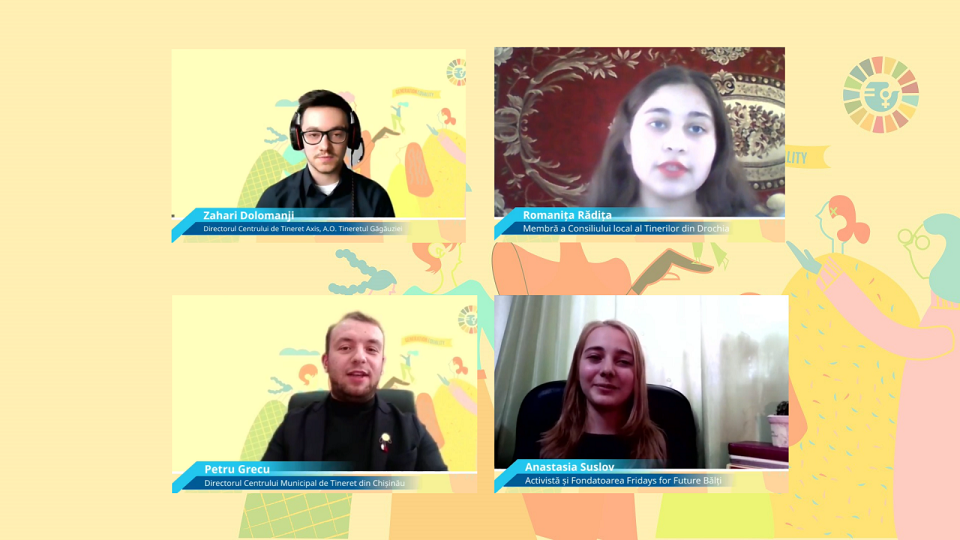 One of these young people is Anastasia Suslov. She is an activist and founder of Fridays for Future in Moldova. Being a pupil, she recently became a promoter of human rights and gender equality. Anastasia says that she became more active in this field after organising a solidarity march in Balti: „On that day, for the first time, I faced perplexity and hate expressed by some people. At that point, I have also heard first sexist phrases. As a result of this event, I came to certain conclusions. I realised that it is not ok that I, being a girl, have to face whistling and honking while walking down the street. It is not ok that I am afraid when I meet other people on the street, especially drunk people. At that point, first thoughts on how to protect myself and many other girls facing the same challenges came into my mind”, the activist says. In this context, Anastasia implemented a project aiming at promoting women’s rights among youth, because, according to her „They are those who for sure will make changes”.

Petru Grecu, Director of Chisinau Municipal Youth Center is of the same mind: „Youth are, in fact, the driving force of our society. This should be taken seriously by local public authorities. According to a poll conducted in 2020, with the aim of identifying the needs of young people between 14 and 35 years, out of 2000 respondents, 34% believe that engagement of young people in decision-making process is very important. While 53% state that it is quite important. This shows us that young people are not enough informed about their opportunities to engage in decision-making”. Thus, Petru Grecu believes that there is a need to create more services for youth engagement, as well as to encourage them to express freely their opinions and concerns regarding promotion of gender equality in the Republic of Moldova. They should learn more about how to establish networks where they would be able to express shared values, how to become volunteers and how to get more information about laws protecting their rights and offering opportunities to develop.

In this context, Romanita Radita, an eighth grade pupil and  a member of Drochia local youth council, says that she chose to be more active in order to be more informed and to establish networks with other young people who share the same hobbies and aspirations. For Romanita, engagement in this activities means not only achieving gender equality at national and international levels but also promoting non-discriminatory behavior towards roma girls and women. „It is very important roma women and girls to actively participate in social life. Discrimination we faced in the past left a mark on our present. When girls and women engage and express their opinion, we are closer to victory over discrimination against women. I would like to encourage all girls to go to universities. I wish we had more projects, meetings, where girls could get information, have support, motivation to take a step forward and to grow personally. I wish schools from the Republic of Moldova could involve roma children in different activities as much as possible. It would motivate them to participate more in social life”.

The engagement of youth in taking concrete actions for achieving gender equality is important for the communities within the Republic of Moldova. Especially when talking about minority groups, which need even more visibility at national level. This is underlined by Zahari Dolomanji, Director of Axis youth center, „Tinerii Gagauziei”. Within the organisation managed by him, Zahari Dolomanji works on promoting positive social examples among people who are directly involved in organisation activities, as well as among general public. „We have implemented the „Equal opportunities, equal engagement” project. Within this project, we promoted gender education and gender equality. We have shown that women and girls can be, and should be part of civil society, having the opportunity to influence social processes important for the development of the community. Now, we have gender equality ambassadors in schools in rural areas, especially in Gagauzia, because we are fully aware that here gender education is not widespread”, the activist mentioned.

In March, UN Women Moldova has launched and organised two editions of Gender Debates Café – a discussions format among young civil activists and those from gender equality field. Within both events, the participants conducted an open dialogue among active people in their communities but also among members of international organisations which support promotion of gender equality. The discussions were aligned with stringent topics within Generation Equality Forum from Mexico, taking place during 29-31 March. The aim of these discussions is to highlight the work carried out now in this context but also to identify other practices aiming at engaging more young people in advancing gender policies at social and economic levels, as well as to empower new generation to speak up about promoting these values and feminist movements.

Related News
01/12/2022
Dialogue held on access to justice for women survivors of gender-based violence
19/10/2022
Tech Women Summit, the platform dedicated to women of any age who work in IT or want to pursue IT careers
29/09/2022
The local socio-economic inclusion mechanism of women survivors of domestic violence was created, tested and piloted in Cahul and Ungheni
28/09/2022
Ten Moldovan women entrepreneurs receive 60,000 MDL each to develop their businesses
28/09/2022
Achievements in promoting gender equality must continue in Cahul and Ungheni
END_OF_DOCUMENT_TOKEN_TO_BE_REPLACED