(Video) Natalia Buza: “I am the first woman deputy chief of a Border Police station and I am proud of it”

Natalia Buza was about to leave the country and build her future somewhere else, but she changed her mind and chose to stay in Moldova and make a career as a border police officer. She was successful in doing so, and became the first woman to hold the position of deputy chief of a Border Police station. Read the last story of the “You know you can” campaign. 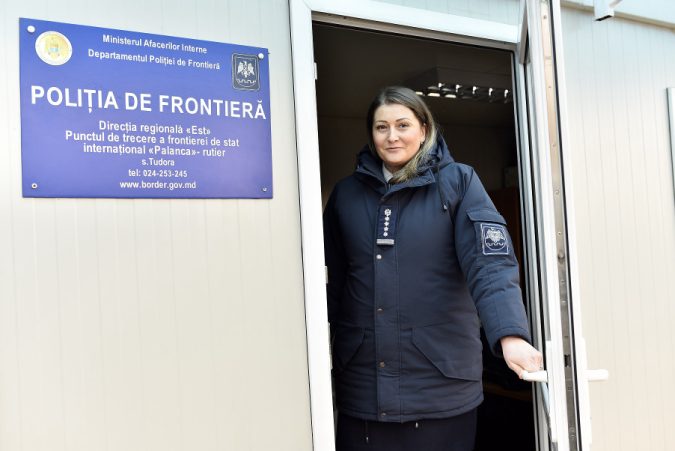 “In 2006 I graduated from the Institute of Political Studies and International Relations, specializing in Political studies and Legal education. In 2008 I started working at the Border Police, where I did many different jobs.

I was an inspector, a senior inspector, chief of the shift, and now, with the help of all my colleagues and management, I became the deputy chief of the Tudora 1 Border Police station. I am indeed the first woman to get this position. Nobody else achieved this in the entire history of Border Police and I am very proud that I was the one to do so.

The idea to become a police woman never crossed my mind growing up. I wanted to become a teacher or a doctor, and I never thought that I would be wearing a police uniform. After finishing the university, I was contemplating leaving the country, but I had a young child and I couldn’t go through with it.

This is why I decided to enter the police force and I chose the Border Police. I was sure that I was going to succeed because I had the right skills. I worked a lot and now my achievements speak for themselves.

During the 10 years of my police career, there were many beautiful moments. In 2011, I had the most successful captures at the customs post in Palanca and my colleagues were a little jealous. They said that it was like I knew which vehicle to approach. In 2012, thanks to these achievements, I became an interim officer, which was called lieutenant at the time. I was very proud of myself and this motivated me to do my job even better.

Due to my achievements, I was awarded the Government diploma at the 20 years anniversary of the Border Police. Two years ago, the Border Police awarded me with the Merit Cross for Impeccable Service, third class.

Men are not really used to having a female leader, but I think that we are already getting used to this as well, because to my teammates I am not a stranger and they are not strangers to me. I worked with them for 10 years and I know that together we will succeed. In the end, the most important thing is to do our job the best way possible.

We fully dedicate ourselves to the service, but we do not forget about our personal lives as well. It is very difficult to combine family life with our job. But, because I am a strong woman with a strong personality, I could overcome all difficulties.

I encourage all the women working at the Border Police and tell them not to be afraid of anything. When they were starting their jobs as inspectors, I was like a mentor to them. There are women who have already succeeded in their careers, becoming chiefs of shifts, and I am very happy because of this.

Regarding future plans, I want to say only this: I want to have a successful career.”

From the total number of persons employed by the department of Border Police, only 21% are women. Only 14% of managing and executive positions within Ministry of Internal Affairs are held by women (MIA, 2016).

In 2018, the Government of the Republic of Moldova adopted a National Action Plan for the implementation of the 1325 Resolution of the UN Security Council regarding women, peace and security for the years 2018-2021. The plan aims to increase the number of women in this field’s institutions and to ensure that this sector is inclusive and promotes human rights and gender equality.

“You know you can” campaign is a dedication to the women and girls from Moldova who have made history and still continue doing so, becoming pioneers in fields traditionally dominated by men, like politics, science, sports, business, military, etc.

Related News
20/01/2023
Women’s organisations in Moldova receive funding to respond to the humanitarian crisis
19/10/2022
Tech Women Summit, the platform dedicated to women of any age who work in IT or want to pursue IT careers
29/09/2022
The local socio-economic inclusion mechanism of women survivors of domestic violence was created, tested and piloted in Cahul and Ungheni
06/04/2022
Svetlana Patras, a referee and trainer: “True football means passion, movement and, of course, team spirit”
30/03/2022
gender sensitive budgets
END_OF_DOCUMENT_TOKEN_TO_BE_REPLACED