(Video) Mariana Grama: “I broke the stereotypes and became the first woman to be awarded the Colonel military rank”

The second story of the “You know you can” campaign is about Mariana Grama, chief of Military Relations J5 Department, Strategic Planning Directorate of the National Army. She is the first woman Colonel in the Ministry of Defense in Moldova. 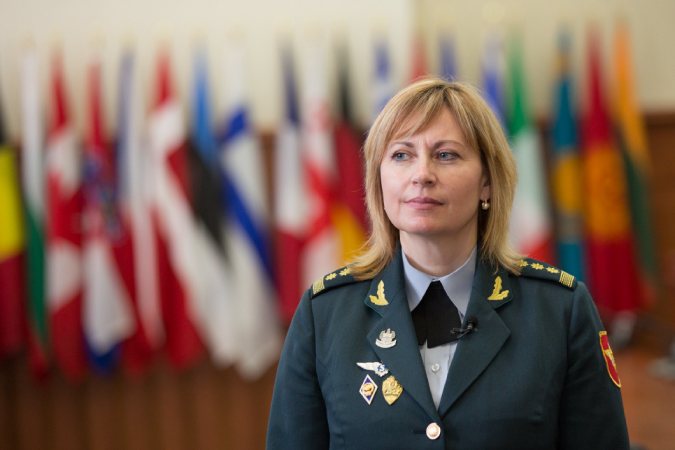 “I have always known that I can get good results in anything I do. I am a strong woman. I had many challenges during my military career. I have started as a chemistry teacher. Then, in 1997, I joined the armed forces of the Republic of Moldova. Currently, I am more focused on military cooperation between partner countries. Also, I am the first woman who was awarded the Colonel military rank, as well as the first female officer to obtain the lieutenancy rank within the Civil Protection and Emergency Situations Department.

It wasn’t easy for me, as anyone can imagine, firstly because I am a woman. And I was warned that it will be difficult, from the beginning. I still remember when I first stepped into the office of the Administration Military Center and saw a man among stacks of papers. He didn’t even raise his head when I introduced myself. But at one point he asked me: “Do you really need this?”. I was shocked by his words, but I answered, without giving it second thought: “Do you have doubts, General?”. He froze, signed the papers, stood up and approached me, saying: “Mariana, you are the only person who had ever stepped into this office to dare answering a question with another question. I wish you best of luck. Take care!”

Another challenge was set by my first commander from the Civil Protection and Emergency Situations Department. When I joined the military, he made me sign two reports: one for joining and one for leaving. He then warned me that it is very easy for him to sign the employment papers, as well as the service release papers. He also told me: “You are the first woman officer within the Department, keep in mind that the future of all women who will come after you is in your hands.”

The biggest challenge was to work in an environment dominated by men. In such situations, when the laws are made by men, they start criticizing you because they have this stereotype that women must stay in the kitchen, take care of their families and not wear the military uniform.

Another challenge for me was combining the personal and the professional life, especially when you have children and when each member of your family has its own ego and personality – this is also a great responsibility.

The most important achievements in my career were initiating and managing the project on strengthening the environmental security. Within this project, around 3300 tons of pesticides waste, abandoned on the territory of the Republic of Moldova in the soviet era, were stored and later evacuated and destroyed in countries like Germany, France and currently, in Poland.

The second large scale project, to which I had actively contributed, was the establishment of 2 laboratories. The activity of the first laboratory is related to supporting the Government’s objectives in exporting goods to the Russian Federation, which means that if the quality of the product is not certified at this laboratory, it cannot be exported. The second laboratory is created within the State University and its purpose is to train young professionals.

The third success is that I became a Colonel. It is a true progress, I practically broke that glass ceiling and I reached this military rank. Also, not least, I am very proud to be a mother.

I am also proud of a project I initiated for mothers with military ranks. Previously, these mothers had the right to only 2 months leave for childcare after giving birth. Following their appeals, I launched a legislative initiative to increase this term, which is now included in the law regarding military status. Now the term of the maternal leave for women in the military is up to one year, depending on the amount of time dedicated to the service, a criterion which was missing before. Also, in cases when the mother would stay on leave for a longer period of time, her leave wouldn’t have been paid. But now everything is paid according to the law.

The legal framework in the military service is re-examined twice per year. We used this to try to change women’s uniform to have more comfortable clothes.

I know that I can do more and I want to get in the position where I can make important decisions to promote women in the military sector and, of course, I want to become a General!"

In Moldova, women are still underrepresented in peace keeping and security fields. Only 37% of the national army staff are women, and 3% of decision makers within the national army are women. In 2012, the Military Academy started accepting female students.

Related News
20/01/2023
Women’s organisations in Moldova receive funding to respond to the humanitarian crisis
19/10/2022
Tech Women Summit, the platform dedicated to women of any age who work in IT or want to pursue IT careers
29/09/2022
The local socio-economic inclusion mechanism of women survivors of domestic violence was created, tested and piloted in Cahul and Ungheni
06/04/2022
Svetlana Patras, a referee and trainer: “True football means passion, movement and, of course, team spirit”
30/03/2022
gender sensitive budgets
END_OF_DOCUMENT_TOKEN_TO_BE_REPLACED