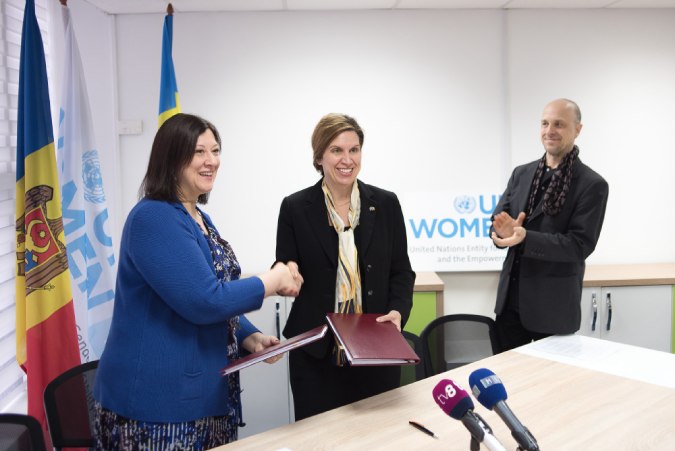 The Government of Sweden extended its financial support towards UN Women’s Strategic Note in Moldova for 2018-2020, to continue advancing gender equality and women’s rights in the country. This extended agreement of SEK 25,8 million (equivalent to USD 3,25 million) is Sweden’s second contribution to UN Women’s Strategic Note in Moldova. Together with the initial agreement signed in late 2016, the total reaches USD 5.65 million.

With Sweden’s support and partnership in Moldova, UN Women will continue its innovative work with government, civil society, media and people of Moldova in advancing gender equality, women’s empowerment, and reducing gender inequalities in its three priority areas:

Thanks to this support, UN Women will expand and deepen its work in these three areas including advancing gender responsiveness of policies and budgets, strengthening women’s participation in non-traditional domains, addressing unpaid care work, advancing the women, peace and security agenda.

“I want to express our appreciation for the trust that was given by the Government of Sweden to UN Women’s work in Moldova. Gender equality and women's empowerment has been proven to be an accelerator for the achievement of the Sustainable Development Goals. I am confident that the partnership between UN Women and Sweden in the Republic of Moldova will help the country in advancing gender equality and overall Agenda 2030 for the benefit of all and leaving no one behind,” said Alia El-Yassir, Acting Regional Director, UN Women Europe and Central Asia, at the agreement signing ceremony.

“Sweden believes in the promotion of gender equality and women’s empowerment, and we pursue it both at home and globally. It is also a top priority for us in our reform support programs in the Republic of Moldova. UN Women is our strategic partner in this area. I’m very happy that by signing today’s Amendment to the Agreement on a long-term support for UN Women in Moldova (2016-2020), we will bring additional resources to this very important work,” noted H.E. Signe Burgstaller, Ambassador of Sweden in the Republic of Moldova. 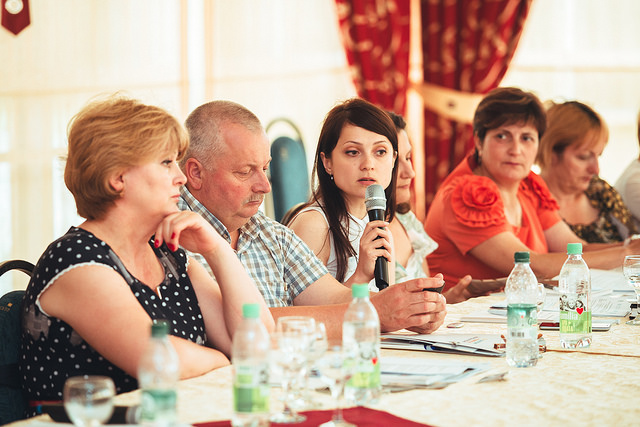 Currently, women represent 21% of the members of Parliament, 20% of mayors and 25 % of cabinet members in Moldova. Photo: UN Women/Dorin Goian

While Moldova has made important progress in area of gender equality, there is still a lot that remains to be done. Women still face discrimination and inequality in social, economic and political life and their representation in Moldovan politics and decision-making remains below international benchmarks. Currently, women represent 21% of the members of Parliament, 20% of mayors and 25 % of cabinet members. Women from particular groups, such as Romani women and women with disabilities are still virtually excluded from representation in public life. Six out of ten of women experienced psychological, physical or sexual violence from their husband or partner (National Bureau of Statistics, 2011). The nationwide share of women entrepreneurs is only 27.5%, and significantly lower in rural areas (14.9%). About 66% of women’s total working time is made up by unpaid work (4.9 hours a day) while men allocate half the time to unpaid work. (Time-use Survey, National Bureau of Statistics, 2014).

The Government of Sweden has been the main donor in the area of gender equality and women’s empowerment in the Republic of Moldova and a long-term partner to UN Women and the government, Parliament, civil society and the UN system in Moldova in advancing gender equality de jure and de facto.

UN Women is operational in Moldova since 2010. Its initiatives empower women throughout Moldova and aim to improve their economic opportunities, their leadership and political participation, and ensure that women and girls live a life free of violence. Working closely with development partners, UN Women supports efforts by the Government, Parliament, civil society, media and communities to promote gender equality and the empowerment of women, in the context of the Agenda 2030 and the Sustainable Development Goals.

Related News
20/01/2023
Women’s organisations in Moldova receive funding to respond to the humanitarian crisis
19/10/2022
Tech Women Summit, the platform dedicated to women of any age who work in IT or want to pursue IT careers
29/09/2022
The local socio-economic inclusion mechanism of women survivors of domestic violence was created, tested and piloted in Cahul and Ungheni
06/04/2022
Svetlana Patras, a referee and trainer: “True football means passion, movement and, of course, team spirit”
30/03/2022
gender sensitive budgets
END_OF_DOCUMENT_TOKEN_TO_BE_REPLACED