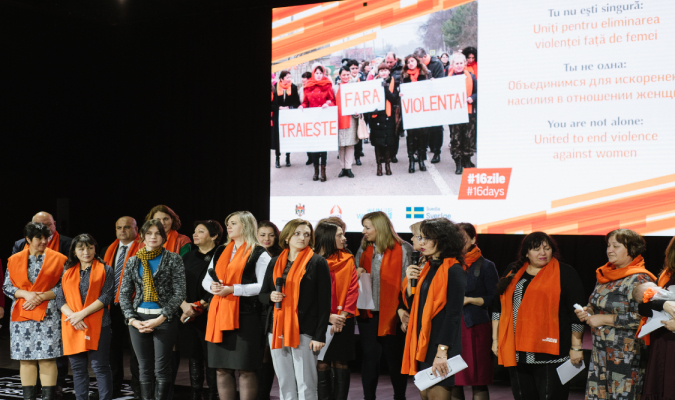 Women survivors of violence made an appeal to public authorities and the society to take immediate actions to combat violence against women. Photo: UN Women/Ramin Mazur

Women survivors of violence and 22 organizations that form the „Life without Domestic Violence” National Coalition made an appeal to public authorities and the society to take immediate actions to combat violence against women. The call was expressed during the Public Dialog „You Are Not Alone: United to End Violence Against Women” which took place in Chisinau on 27 November 2017.

According to the National Bureau of Statistics (2011), 6 out of 10 Moldovan women experienced at least one form of violence from their partners, during their lifetime.

Women and civil society named the following steps among the most important ones:

The theatrical performance „Love does not hurt” based on life stories of women who overcame domestic violence – was performed at the event by MADE Theater. The Positive Champion Maria Scorodinschi told her story of overcoming violence and explained in practical terms the obstacles she faced and the solutions she found.

„I endured a lot, but I never thought that it would last forever. Deep in my heart I believed in a change, I believed that a miracle would happen. The miracle did happen when I spoke out and started seeking help. Now I help women break the vicious circle of violence. If it were not for the women support centers, women would not have enough courage to come out of violence,” she says. Maria Scorodinschi in one of BBC News’ 100 most inspirational and innovative women 2017.

In response to women’s and civil society organizations’ call, the state representative declared the following:

“Violence should not be present here at home, in the Republic of Moldova. For the first time, our country has a new strategy to combat violence. We hope to start implementing it in 2018”, said Stela Grigoras, the Minister of Health, Labour and Social Protection.

Viorica Dumbraveanu, State Secretary, Ministry of Health, Labour and Social Protection, stated that the process of training social workers would include the best practices, including international ones.

Rodica Josanu, representative of the Ministry of Education, Culture and Research noted about the current broad revision of the school curriculum. Once adopted, it would include the human rights- and violence prevention-centred approach. “We want this curriculum approved untill the end of the year,” stated Josanu.

“The police gives great attention to the violence phenomenon. The amendments on emergency restraining orders became effective this year. By reacting immediately, we take a firm step towards better protection of survivors of violence. As of today, we have over 1,600 issued emergency restraining orders, over 1,600 victims have been protected,” said Ghenadie Neamtu of General Police Inspectorate. He added that it is important to ensure training of both police officers and multi-disciplinary teams.

“Breaking the silence is the first step in combating this culture of violence. We have to have zero tolerance for violence in the society. In cases when violence does happen, we need support services to take necessary measures and provide appropriate assistance,” said Asya Varbanova, UN Women Country Representative a.i.

“Gender-based violence is a human rights issue. Each person has the right to live a life free from fear of violence. At the same time, violence is the ultimate expression of inequality between women and men. That is why it is important to work towards gender equality and empowerment of women,” said Signe Burgstaller, Ambassador of Sweden to Moldova.

The Public Dialog “You Are Not Alone: United to End Violence Against Women” was organized by the United Nations Entity for Gender Equality and the Empowerment of Women (UN Women), Ministry of Health, Labour and Social Protection, “Life without Domestic Violence” National Coalition, with the support by the Swedish Government.

This event is the part of the “16 Days of Activism Against Gender-Based Violence” international campaign which takes place each year from 25 November, the International Day for the Elimination of Violence Against Women, to 10 December, Human Rights Day. This campaign is conducted in Moldova for the 17thconsecutive year by Government, local authorities, international organizations, civil society and citizens of Moldova. More than 70 events and activities will have been conducted in the entire country during the campaign this year. The purpose of the campaign is to raise awareness on the issue of eliminating violence against women and girls.

Related News
24/01/2023
Promoting healthy family dynamics in Moldova through education
10/12/2022
Push forward: 10 ways to end violence against women
01/12/2022
Dialogue held on access to justice for women survivors of gender-based violence
18/04/2022
Artemida Drochia
10/12/2021
Art therapy: 5 pieces of art made by survivors of domestic violence, exhibited at the Parliament of the Republic of Moldova
END_OF_DOCUMENT_TOKEN_TO_BE_REPLACED