Orange the world: Moldovans Team up to End Violence against Women and Girls 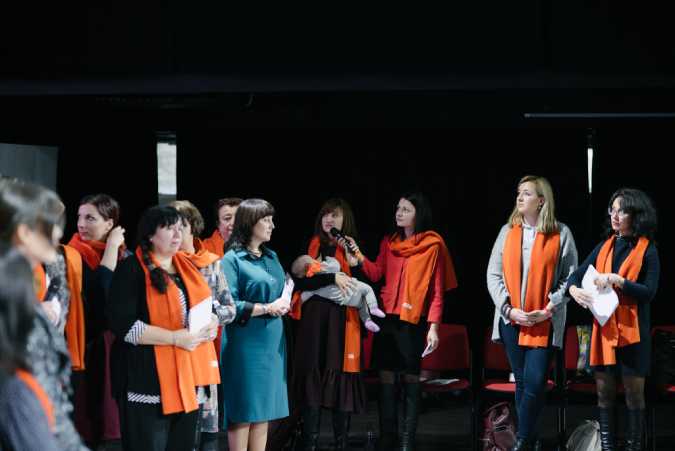 The Moldovan Parliament, Government, local public authorities, United Nations, non-governmental organizations, teachers and students, police officers, people from all across the country joined the international campaign “16 Days of Activism against Gender-based Violence”, which took place between November 25, the International Day for the Elimination of Violence against Women, and December 10, the Human Rights Day.

The campaign kicked off on November 24th with a concert of solidarity with women survivors of violence. During the event the United Nations in partnership with the National Coalition “Life without Domestic Violence” launched a fundraising campaign for a survivor of violence in need. The event brought together over 500 representatives of the Government, Parliament, civil society organizations, development partners and people willing to support this cause. The building of the National Philharmonic was lit in orange, a colour which symbolizes a bright life, free from violence, for every woman and girl.

During the public event “You Are Not Alone – United to End Violence against Women”, which took place on November 28th in Chisinau, women survivors of violence and the civil society had an open dialogue with the government representatives about taking the necessary next steps to  prevent and end violence against women and girls. They called for the adoption and funding of the National Strategy for Preventing and Combating Domestic Violence and its action plan and for the ratification of the Istanbul Convention. The authorities committed to adopt this strategy, and to create better services for the victims of violence. The event was organized by UN Women jointly with the Ministry of Health, Labour and Social Protection and the National Coalition “Life without Domestic Violence”.

UN Women and the Embassy of Italy shared Recipes against Violence in an awareness-raising community event, on November 26 at the “Helmut Wolf” shelter in Ciuciuleni, Hincesti, during the days of the Italian cuisine. The public learned what they can do to prevent violence and tried the traditional dishes cooked by Italian chefs. 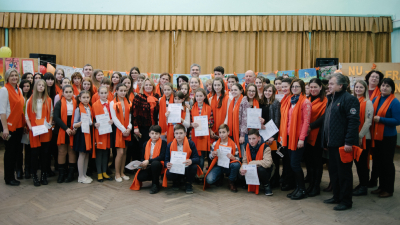 Youth got actively involved in this campaign. 92 school students from Drochia district took part in drawing, poetry and essay contests entitled “We Do Not Tolerate Violence” and discussed with experts about how to build harmonious relationships, about non-violent communication and violence prevention.

“Stop indifference, stop violence” is a line from a poem written by Irina from Drochia.

Over 200 young people from the towns of Hincesti and Drochia watched the Love Doesn’t Hurt” performance by MADE Theatre and UN Women, based on life stories of Positive Champions – the women who overcame violence. Maria Scorodinschi told her own story of breaking this vicious cycle, followed by discussions about the causes of violence and how to prevent it, moderated by the National Coalition “Life without Domestic Violence”. 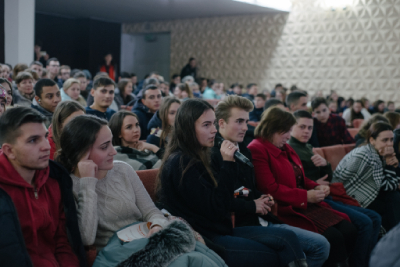 “This play meant a lot for me. It encourages us to do something to prevent and fight violence. As a future police officer, I will do my best to reduce it”, said the eighteen-year old Maria from Nisporeni.

The 16 Days of Activism against Gender-based Violence campaign triggered a real movement in social media to call for ending violence against women and girls. This issue was broadly covered in mass media and addressed during meetings at different levels and events.

According to the National Bureau of Statistics (2011), 63% of the Moldovan women have experienced at least one form of violence from their partners during their lives.

The 16 Days of Activism campaign has been organized in Moldova for the last 17 years by the Government, local authorities, the United Nations and other international organizations, civil society and people from all over the country. This year more than 70 events and activities took place across the country. The purpose of the campaign is to increase awareness on preventing and ending violence against women and girls.

Related News
24/01/2023
Promoting healthy family dynamics in Moldova through education
10/12/2022
Push forward: 10 ways to end violence against women
01/12/2022
Dialogue held on access to justice for women survivors of gender-based violence
18/04/2022
Artemida Drochia
10/12/2021
Art therapy: 5 pieces of art made by survivors of domestic violence, exhibited at the Parliament of the Republic of Moldova
END_OF_DOCUMENT_TOKEN_TO_BE_REPLACED