(Infographics) Gender Barometer „How do Women and Men Participate in Politics and Decision-Making?” was launched today in Chisinau 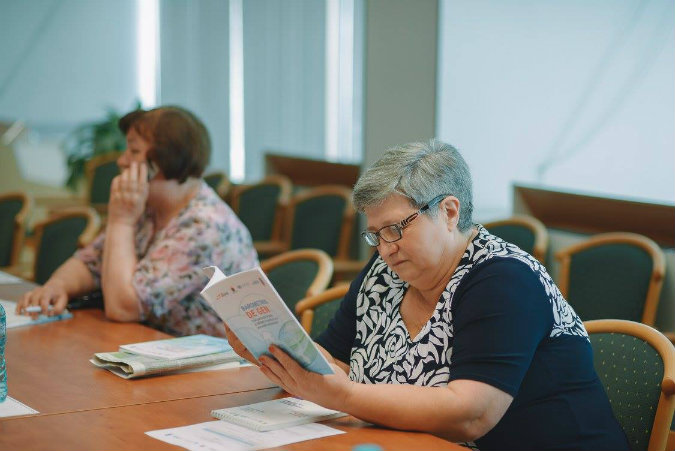 How do women and men participate in politics and what are the perceptions of society regarding the relations between men and women? These are some of topics addressed today, May 30, during the official launching of the research Gender Barometer. The first comprehensive study of this kind was launched in 2006 and now, ten years apart, it aims to provide insight into how women's and men's involvement in politics and decision-making has changed or not in the last decade and what is the level of acceptance of gender values in the Republic of Moldova. 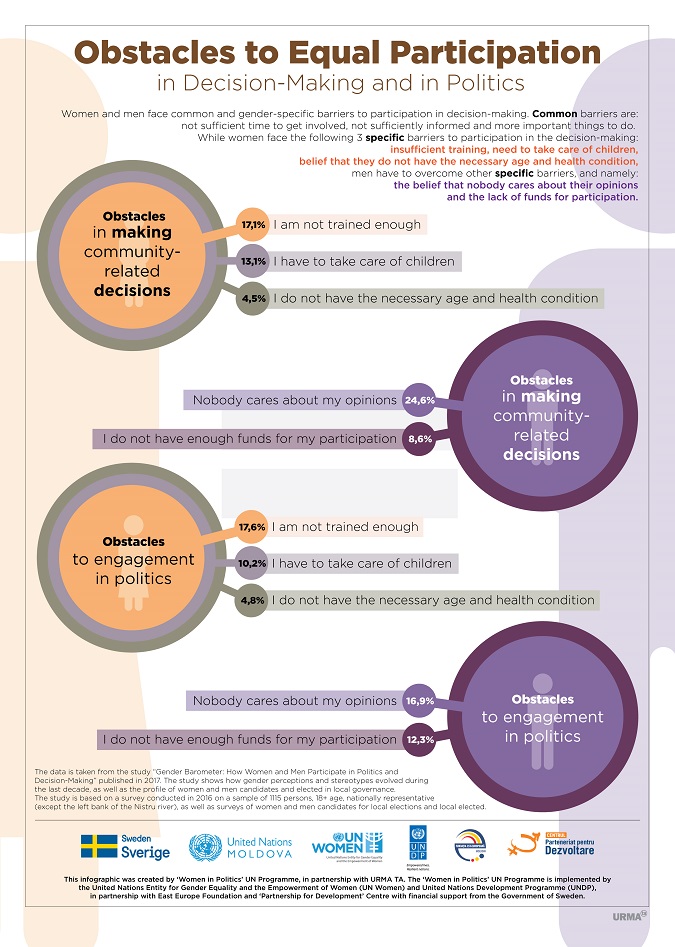 Asya Varbanova, program coordinator UN Women Moldova, expressed her gratitude that after a lengthy and hard-working process, the study was launched, thanks to the efforts of civil society partners and support of the Government of Sweden. "It is the first study, a premiere for Moldova, which maps the journey of women and men from candidates to their election in decision-making positions and the challenges faced by both women and men in politics. Also, in this study we can see how gender stereotypes have changed over the past 10 years. And while there is some progress on gender stereotypes, research shows that women face more challenges in entering into politics. Therefore, the Barometer confirms that we still have a lot of work to do in promoting gender equality in society, as a whole and in politics, in particular," stated Asya Varbanova. 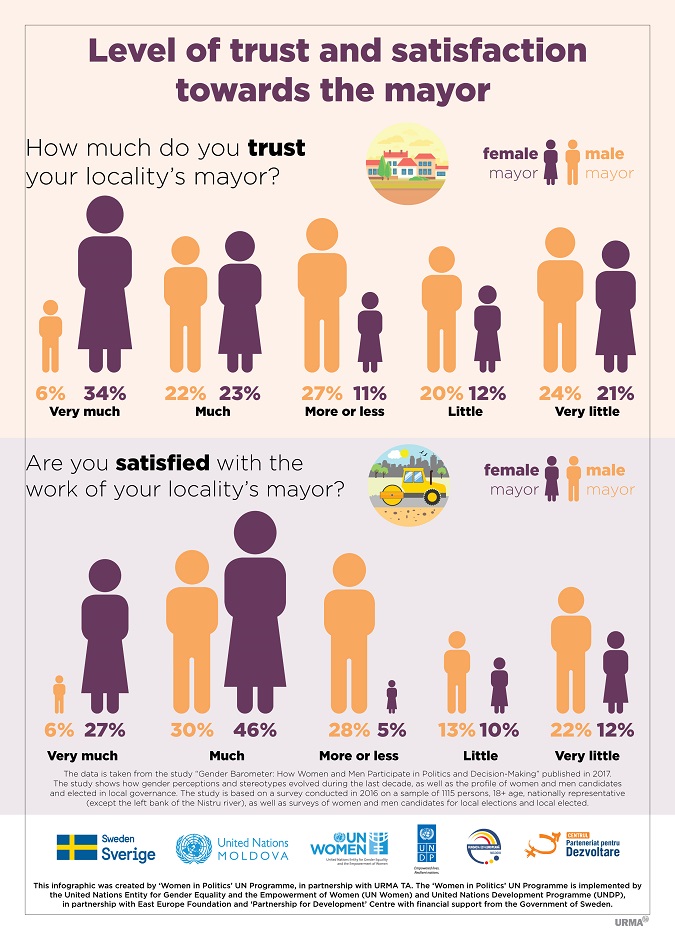 Lilia Pascal, Head of the Department on Prevention of Violence and Insurance of Gender Equality Policies, within the Ministry of Labour, Social Protection and Family, sincerely thanked the organizers of this event. "This study is extremely necessary to be able to develop gender-sensitive policies. Such analyzes provide us with the opportunity to penetrate the essence of gender equality issues and to reflect major gender gaps in our policies," pointed out Lilia Pascal.

During the last ten years, the perceptions of traditional gender roles have not improved significantly. The results of the opinion poll show that in 2016, 64% of respondents agreed that man is the one who must earn money and the woman must take care of family and run the home,” said Alexei Buzu, director of Partnership for Development’ Center. 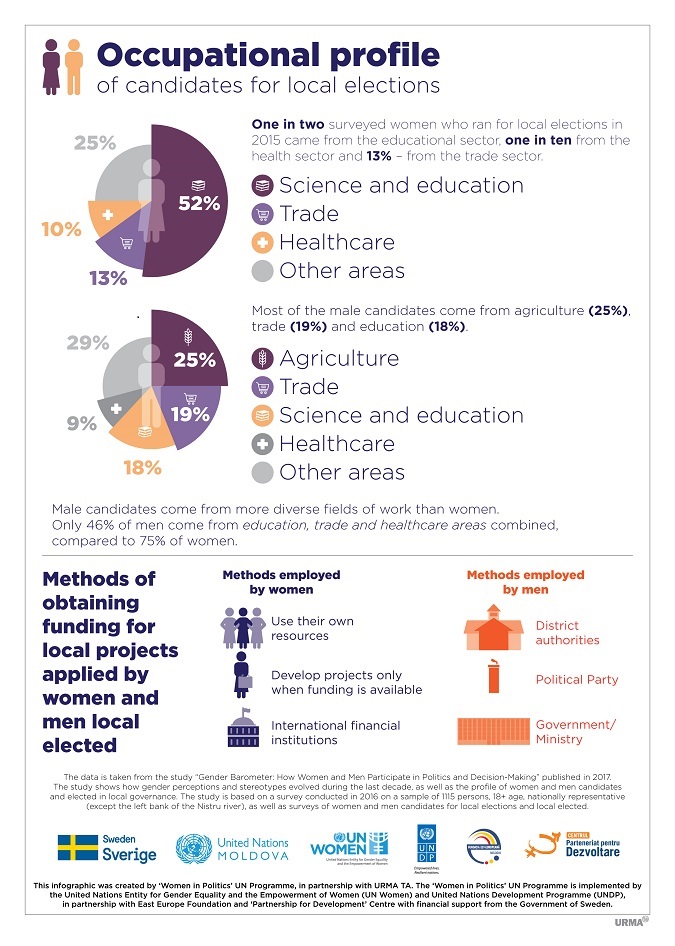 On the other hand, perceptions of women’s participation in politics and decision-making developed considerably. When asked who should lead in the public administration, in politics or at work, the man, the woman or no matter who of them, about 72% of respondents chose the last option in 2016, an increase by 11 percentage points compared to 2006.

Conclusions from the Gender Barometer are based on the achievement of three researches targeting voters, local female and male candidates and elected representatives. First, the Gender Barometer questioned the general population of the Republic of Moldova via a national representative survey, on a sample of 1115 persons. Second, the Gender Barometer questioned the male and female candidates for local general elections in June 2015. This helped to clarify the specific challenges of the election campaign and of the party activity for women and men. Third, the survey targeted the specific activity of the locally elected women and men.

Research was conducted under ‘Women in Politics’ UN Programme.This Programme is implemented by the United Nations Entity for Gender Equality and the Empowerment of Women (UN Women), United Nations Development Programme (UNDP) in partnership with East Europe Foundation and ‘Partnership for Development’ Center with financial support from the Swedish Government. The Programme aims at supporting an increased and significant participation of women in politics and decision-making, by creating an enabling environment. The Programme also aims at developing the capacities of women leaders before, during and after the local and national elections.

Related News
03/08/2017
Law enforcement institutions take a step forward to mainstream gender in their work
20/01/2023
Women’s organisations in Moldova receive funding to respond to the humanitarian crisis
19/10/2022
Tech Women Summit, the platform dedicated to women of any age who work in IT or want to pursue IT careers
29/09/2022
The local socio-economic inclusion mechanism of women survivors of domestic violence was created, tested and piloted in Cahul and Ungheni
06/04/2022
Svetlana Patras, a referee and trainer: “True football means passion, movement and, of course, team spirit”
END_OF_DOCUMENT_TOKEN_TO_BE_REPLACED