Dominika Stojanoska: We need a world where decisions about our future are being taken by women and men equally 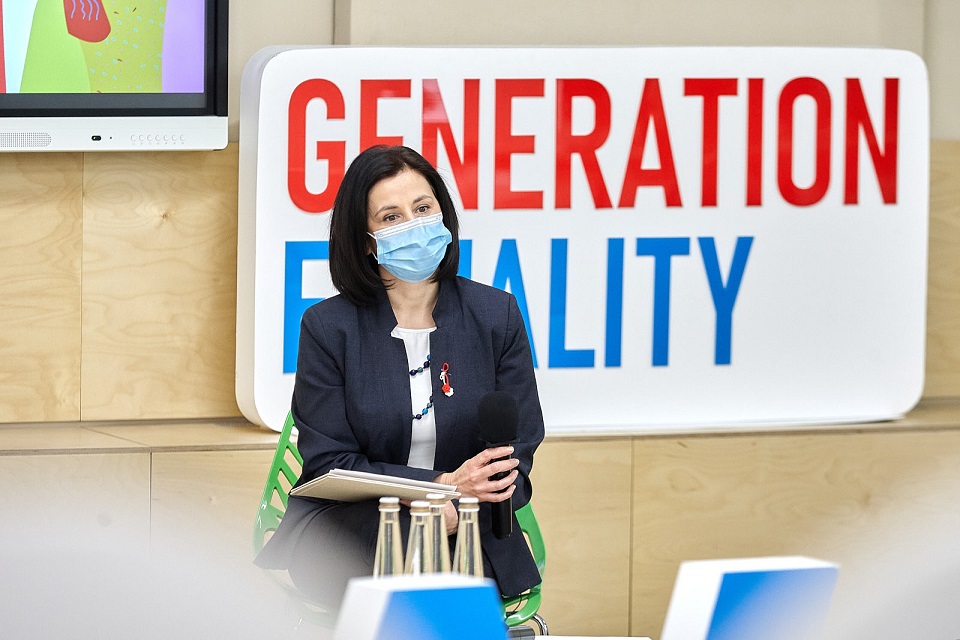 ”This year we celebrate International Women’s Day under the theme ”Women in leadership: Achieving an equal future in a COVID-19 world”. It has been almost one year since we have been collectively experiencing one of the biggest health pandemic in the recent period. Tremendous efforts have been put by women, girls, men and boys all over the world to contain the virus and to provide the adequate response. However, the socio-economic impact of the pandemic has been disproportionally affecting women, as they have been bearing the increased burden of unpaid care work during the lockdown, have endured increased economic insecurity being mostly employed in the sectors heavily impacted by restrictive measures and have been enduring increased incidence of domestic violence. At the same time, women have been the frontliners in preventing the virus from spreading and protecting the population, since they represent 79.1% of those employed in the health and social protection sectors. The engagement of women in fighting the virus, did not corresponded to their equal engagement in the decision-making on the recovery measures. From all covid-19 tasks forces worldwide, only in 3.5% of them gender parity has been ensured.

If we want to built back better and greener, we need more women in leadership positions and gender parity in the decision-making processes. And this does not refer only to emergency situations, but in overall, as we have enough evidence that when women are included in policy making or when governments adopt feminist agenda, those policies are more responsive to the diverse needs of women and men, including from most vulnerable categories.

However, challenges continue to be present and to persist in the country. We still evidence strong gender stereotypes and patriarchal social norms assigning women to the private area of carework and to men the public area of decision-making. Although we witnessed increased representation of women in national parliament and local councils, many women engaged in public sphere face harassment, violence and intimidation.  Women need equal opportunities to enter the labor market and secure income from job that is equally paid as men if the job is of equal value, and men need to be more engaged in the unpaid carework, so that this work that remains still invisible starts to be recognized, redistributed and re-valued.

UN Women Moldova, in close coordination with the UN sister agencies and jointly with the government, the civil society, the private sector and the media are fully committed to support building back better and greener. We will continue to prioritize women in leadership and participation in decision-making processes and their economic empowerment, while we generate evidence and data and combat obsolete gender norms and stereotypes, including violence against women.

We mark International Women’s Day with the aim to remind ourselves that is more than a century that we are fighting for equality. And although progress has been made, this has been modest and too slow.  In line with UN Secretary-General’s message: “We need to fast track women in decision-making if we aim at achieving the SDGs”, UN Women, in partnership with the Governments of Mexico and France, launched the global solidarity movement Generation Equality and gather national governments, international and regional organizations, the civil society movement and the private sector, in joint alliances and concrete commitments to accelerate progress on gender equality.”