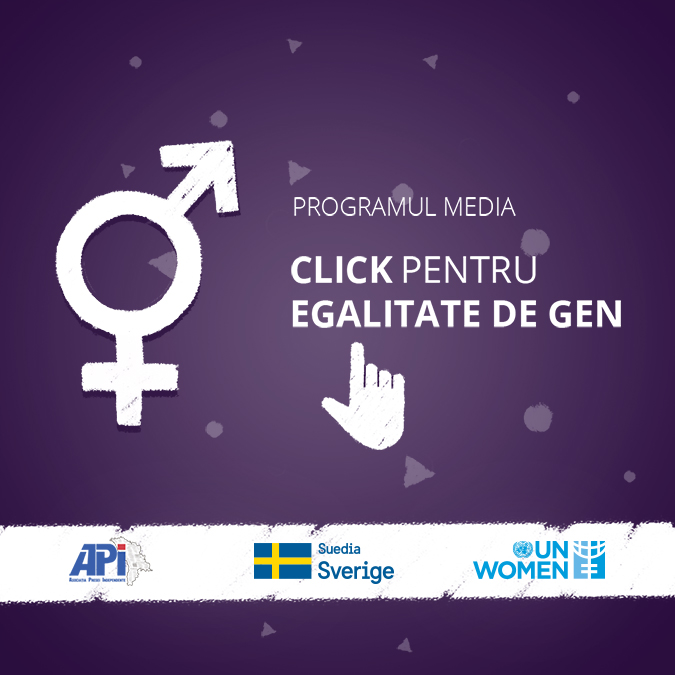 UN Women Moldova and the Association of Independent Press (API) announce the launch of the “Click for Gender Equality” Media Programme. The 5-month programme includes trainings for journalists and members of the regulatory institutions, a journalistic contest that will culminate with a study visit in one of the European countries with experience and good practices in gender-sensitive journalism.

Asya Varbanova, Representative a.i. of UN Women Moldova, stated: “Civic journalism has its roots in the fight for dignity, progress and rights for all. We invite journalists to join us in reinvigorating this tradition and getting new ideas and knowledge on gender equality and how to promote it - both within their working environment and in the portrayal of women in media. Be the champions of the journalistic standards and gender equality!”

Programme participants will have the opportunity to present, within a competition, their journalistic materials that reflect gender equality. The winners will be announced during an award ceremony, and some of them will benefit from a study visit to one of the European Union countries.

To participate, interested candidates shall complete the participation form located here https://bit.ly/2yvQDCT no later than August 19, 2018 at 23.59

For more details, please contact: Stela Roman, project coordinator of Association of Independent Press (API), at 022 210602, or at [ Click to reveal ].

The “Click for Gender Equality” Media Programme is carried out at the initiative of UN Women Moldova, in cooperation with the Association of Independent Press and with financial support of the Swedish Government.

Related News
24/01/2023
Promoting healthy family dynamics in Moldova through education
20/01/2023
Women’s organisations in Moldova receive funding to respond to the humanitarian crisis
30/12/2022
Motivation for life: One Ukrainian refugee’s mission in Moldova
27/12/2022
Valentina Buhnă, founder of Flavorya, on being an entrepreneur and the unusual tastes of dried fruits
10/12/2022
Push forward: 10 ways to end violence against women
END_OF_DOCUMENT_TOKEN_TO_BE_REPLACED