(Video) Mariana Eșanu-Cherdivara: “I proved that I didn’t win by chance”

The athlete Mariana Eșanu-Cherdivara, 25 years old, is the protagonist of our third story of the “You know you can” campaign. She is triple European champion, double world champion and the only athlete in women’s wrestling from the Republic of Moldova who participated at the Rio Olympics in 2016. 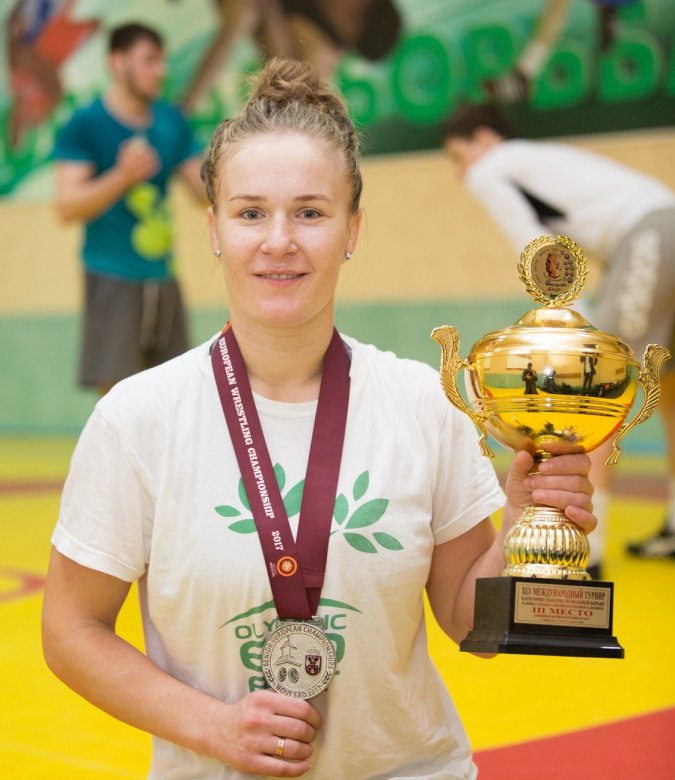 “I knew that I could reach success and have great results. I am very proud of it.

I decided to practice wrestling after learning that  a sports hall was opened in my village. . My younger brother was the first one in our family to do wrestling. When I saw that he has an interesting activity, I asked my father to allow me to practice as well. He told me: “There aren’t any girls there, how can you go?”.

When the trainer announced that he was organizing wrestling session for girls, I was one of the 20 girls who registered. And in the end, I was the only one to reach such high results. Because there weren’t many opportunities in the village, I went to train in Călărași town, where I met my trainer who helped me achieve these results in wrestling.

When I trained with the boys, they were often unhappy that I was winning all the time. “How can a girl beat us?”, they would ask. There were even moments when the boys would cry, because I won. After half of year, I went to the European championship together with the entire junior team of the Republic of Moldova, where I, not even knowing what it would mean for me, won the first place. I was 15. Everyone was amazed and asked my trainer: “Where did you find her?!”. He answered: “This athlete knows what hardship means.”

When I was older, I got the first place and the European junior champion title. The next year – I won again. At that time, many wondered if I won by chance. When I got the first place for the third time, I had proven them wrong and that I am a true winner. Later, in 2011, I participated at the World Championship in Bucharest. Even though I had a spinal trauma, I couldn’t miss this chance. The trainer asked me if we should go and I firmly answered that we should, although I didn’t know if I could fight or not. I was shocked by the way I wrestled, I wasn’t feeling any pain, and the results were good – I got the second place at this world championship.

Another success was my participation at the Olympics in 2016, where I was the only female wrestler from the Republic of Moldova. My results were quite good. I was the 11th out of 22 best athletes in the world. It wasn’t the best result, but it was a good one for me, because this was a dream of mine since I was a child – to participate at the Olympics. And my dream came true!

Still, there are two moments in my life which I can never forget. The first one was when I went to a championship in Hungary.

At the time, I didn’t know that there was another heart beating in my belly. But when I was wrestling, I felt such strength, I was full of energy. Soon after, I found out I was pregnant. I was very excited and I didn’t know how I was going to tell my trainer. But he had a positive reaction to my news. He was also the one to assure me that I will manage to take care of the child and return to wrestling, that I will learn to combine these activities. The second memorable moment took place more recently, in 2017. I was thinking about taking a break from wrestling and I told my husband that it was time to give our daughter Andreea a little brother, because I wanted to be ready in time to participate at the Tokyo Olympics in 2020. After a few unsuccessful attempts, I decided to return to wrestling. I trained for two months and I went to the European Seniors Championship. I was feeling very well, I was full of hope and I got the second place, which is one of the best results of my career.

When I returned home, after a couple of days, I learned that I was pregnant. I was again wrestling while being pregnant and not knowing it. My brother jokes that it wasn’t a fair fight, because there were two against one. In Moldova, it is not very easy to get good results, because you need resources for equipment, vitamins, spaces for professional practice – all these things are necessary in order to achieve high results. Still, I never complained that I didn’t have the support and encouragement.

My friends, my family and my trainer have always supported me and they always tell me that I can do whatever I want.For the near future, I want to see my youngest child grow a bit, so it would be easier for me to go to competitions. Another dream of mine is to participate at the Tokyo Olympics in 2020. Even if many of my dreams came true, I still want to achieve more.

I am happy with where I am today.”

Related News
20/01/2023
Women’s organisations in Moldova receive funding to respond to the humanitarian crisis
19/10/2022
Tech Women Summit, the platform dedicated to women of any age who work in IT or want to pursue IT careers
29/09/2022
The local socio-economic inclusion mechanism of women survivors of domestic violence was created, tested and piloted in Cahul and Ungheni
06/04/2022
Svetlana Patras, a referee and trainer: “True football means passion, movement and, of course, team spirit”
30/03/2022
gender sensitive budgets
END_OF_DOCUMENT_TOKEN_TO_BE_REPLACED