From where I stand: “I am different, but that doesn’t mean that I should be condemned”

Olga Berdeu, 50, is a woman with disabilities from Chisinau, the capital of Moldova, who attended UN Women’s "We have abilities, we want possibilities!" initiative, which aims to strengthen the leadership skills of women with disabilities in the Republic of Moldova. The initiative ran from June to October 2017 and was part of the UN “Women in Politics” Programme, financed by the Government of Sweden. 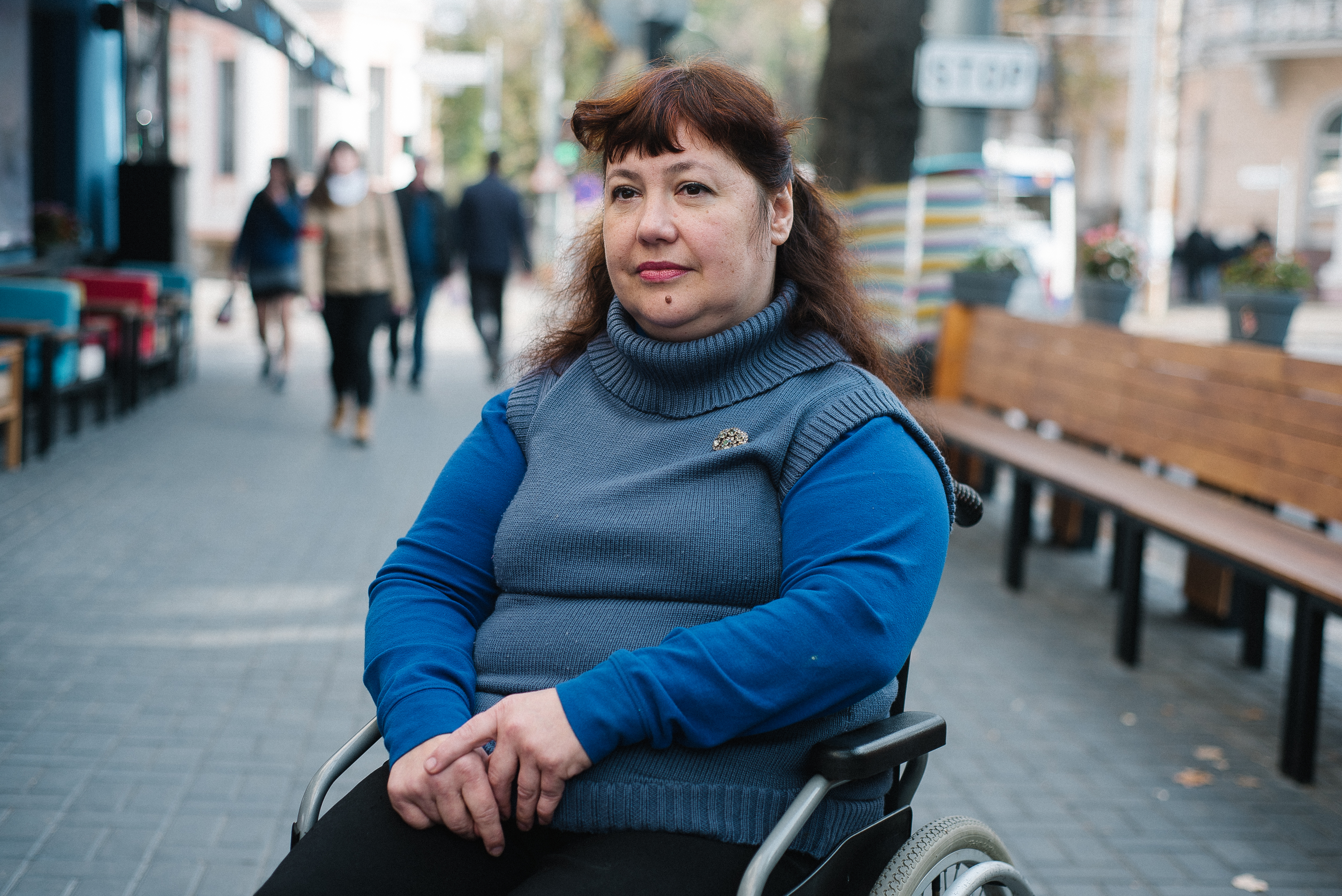 Olga Berdeu, 50, a woman with disabilities from Chisinau, the capital of Moldova

"Being a woman with disabilities in Moldova is not easy. You should be a thousand times stronger than any other women, especially if you want to become a mother or if you want to get a job. On the other hand, you can’t rely only on personal strength either. It’s important to have self-confidence, necessary knowledge and financial independence.

For 30 years, I was financially dependent on my husband. When we divorced unexpectedly two years ago, I realized that I was not ready to make a living on my own. It’s been very difficult to deal with this challenge. We always had a common budget that we planned together. All I was thinking was, ‘What am I going to do next? How will I live without him?’ My health started to deteriorate. I realized that my pension would not allow me to cover all my expenses on my own, such as medicines, utilities and food.

But I'm lucky that my two children and two grandchildren helped me. I’m lucky that I could have children at the first place. The fact that I wanted to be a mother was condemned and regarded as an egoistic act by others. I had to face prejudices and heavy words like, ‘Why do you need a child with the state you are in?" When I got pregnant and had my first medical checkup, the doctors didn’t even ask me how I feel or what I want. They already planned an abortion for the next day. I had to go back to the hospital a few months later to make sure nobody would force me to have an abortion.

Now I feel that my life is turning around for good. After a complex training program, supported by UN Women in Moldova, I realized the importance of self-confidence and financial independence for a woman with disabilities. This initiative helped me to face my fears and now they disappeared. I’m feeling confident that I can start my own business and if I plan properly and acquire the necessary knowledge, I will succeed.

If I could go back in time, I wouldn’t have been the same person. If I could respond to those who were judging me, I’d say ‘Yes, I am different, but that doesn’t mean that I should be condemned. If I want to become a mother, it's my right. If I want to get into politics, it's my right and if I want to go to the theater - it's my right. Maybe I can’t move my hands and legs, but I have a soul and I have aspirations that could change things in this country.’

Olga Berdeu already started working on a business plan for her new endeavor. UN Women’s "We have abilities, we want possibilities!" initiative reached 40 women with disabilities across the country in 4 months. It was concluded with a National Forum, which brought women with disabilities face-to-face with government representatives, Members of Parliament and development partners from Moldova to voice their needs and concerns.  Ms. Berdeu’s story is related to Sustainable Development Goal (SDG) 10 that focuses on empowering and promoting the social, economic and political inclusion of all, irrespective of age, sex, disability, race, ethnicity, origin, religion or economic or other status. Her story also is related to SDG 5 with a target on ensuring women’s full and effective participation and equal opportunities for leadership at all levels of decision-making in political, economic and public life.