24 localities in Ungheni and Cahul districts will promote gender equality and raise awareness of gender-based violence through a large project dedicated to wall art (graffiti). 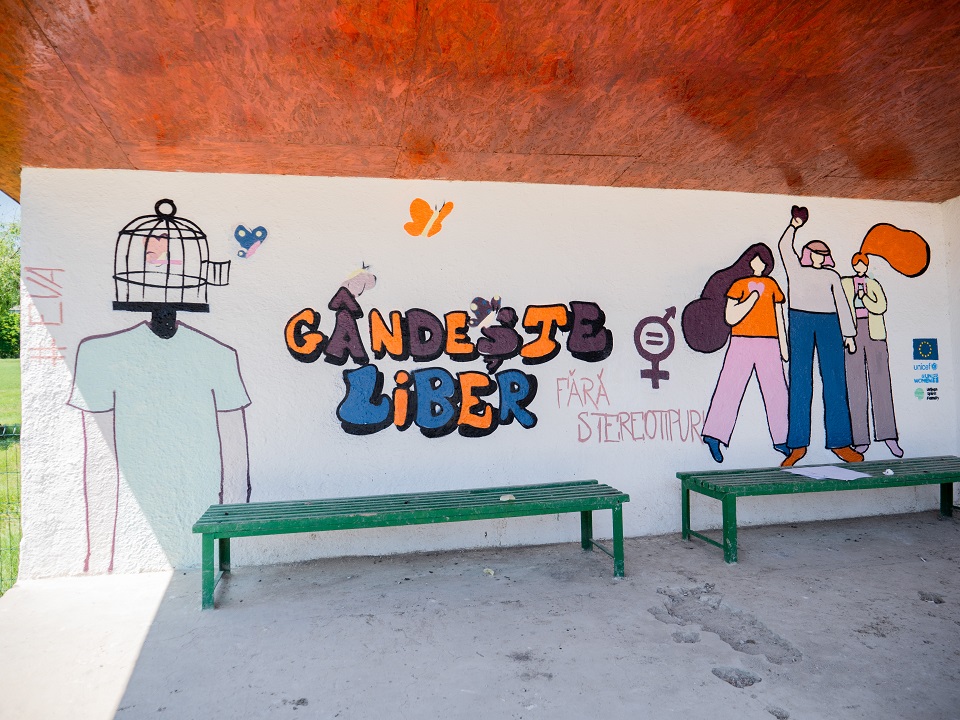 In close collaboration with local authorities and the Urban Spirit, the campaign to raise awareness through mural art – Equality through art will begin this July. It will include a series of online and offline activities to promote gender equality, combat gender stereotypes, as well as encouraging girls and women suffering from violence to speak out and report cases of violence.

"Visual art is a very good tool to convey messages, to raise the interest of and engage young people in activities tackling sensitive topics such as gender equality or combating violence against girls and women. Through the EVA project, we want to communicate to the society how important it is to report violence, combat gender stereotypes and raise awareness of gender equality. In addition to online sessions and summer schools, young people from Ungheni and Cahul districts will paint 24 murals, which will send the message that together we can achieve equality, including through the social arts" said EVA project manager Polina Panainte.

The project will include a series of practical visual art workshops, namely street painting (graffiti) with the participation of young people from Cahul and Ungheni districts, 22 murals created in public spaces, as well as two summer schools for young people interested in social innovation and art, with the aim of expressing through art the global problems that require urgent solutions.

The project will engage both those who already have experience in creating art objects (young designers, artists, students who are passionate about drawing), as well as young people who are new to visual art, but would like to learn to implement their ideas using mural art in order to promote social ideas, particularly gender equality.

The project consists of 3 stages:

Phase 1 of the project – Equality through art – consists of several 4-day information sessions to discuss stereotypes, gender equality, gender-based violence, as well as to sketch out ideas for creating murals in Zagarancea, Valea Mare (Ungheni district) and Baurci-Moldoveni and Zirnesti (Cahul district), including with the participation of young people from Cahul and Ungheni cities;

Phase 3 of the project (August) – two summer camps with the involvement of Cahul, Baurci-Moldoveni, Zirnesti, as well as Ungheni, Zagarancea and Valea Marea. The camp program will include information on the use of art as a tool to promote gender equality, fun activities such as break-dance or activities with the participation of a DJ, etc.

More about these events as they develop can be found on social media pages, on the Facebook page or website of UN Women Moldova.

About the EVA project:

In 2020, UN Women Moldova, in partnership with UNICEF, began implementing the EVA project – Strengthened Gender Action in Cahul and Ungheni districts, funded by the European Union. The project has two major objectives: promoting gender equality and women’s empowerment by mainstreaming gender in local public policies and by combating domestic violence against women and children. The EVA Project is to be implemented in 24 settlements across Cahul and Ungheni districts until December 2022.

This press release is launched as part of the EVA project "Strengthened Gender Action in Cahul and Ungheni districts", funded by the European Union and implemented by UN Women in partnership with Urban Spirit and UNICEF. Its content is entirely the responsibility of the author and does not necessarily reflect the opinion of the European Union.

E-mail: [ Click to reveal ]
Related News
24/01/2023
Promoting healthy family dynamics in Moldova through education
20/01/2023
Women’s organisations in Moldova receive funding to respond to the humanitarian crisis
30/12/2022
Motivation for life: One Ukrainian refugee’s mission in Moldova
27/12/2022
Valentina Buhnă, founder of Flavorya, on being an entrepreneur and the unusual tastes of dried fruits
10/12/2022
Push forward: 10 ways to end violence against women
END_OF_DOCUMENT_TOKEN_TO_BE_REPLACED