Take five: “While everyone is silent, nothing can happen”

Natalia Nalimova, from Tiraspol in eastern Moldova, works for the NGO, Healthy Future, which assists HIV-positive persons. Ms. Nalimova is also a “Positive Champion” who has publicly told her personal story as part of the “Positive Deviance” project, supported by the Initiativa Positiva NGO, UN Women Moldova and the Government of Denmark. The initiative helps women to overcome violence and advance the rights of women and men in Moldova. She shares her perspectives on Beijing +25. 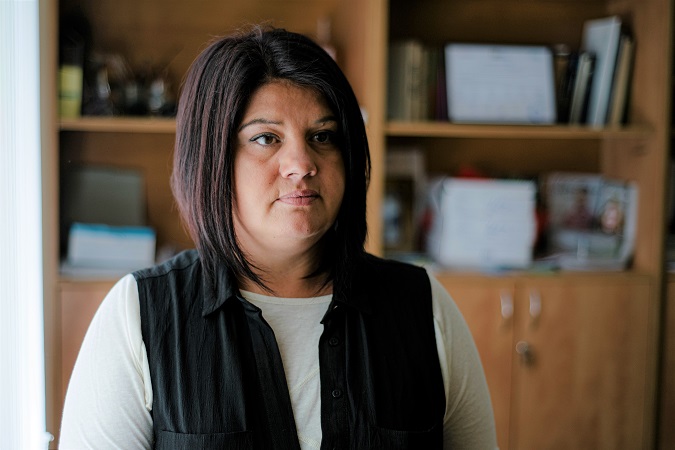 The 25th anniversary of the Beijing Declaration and Platform for Action to empower women and girls is next year. What drove – and drives – the women's rights and gender equality agenda?

A general global trend and economic development led to an inevitable realization that women have the same rights as men and that gender is not be an indicator of ability.

What has fundamentally changed in gender equality and with women and girls in 25 years?

Access to medicine for women has improved. We can now monitor and communicate with colleagues from Central Asia. Now women themselves can manage issues related to their body and their health.

In Moldova, we now have free access to treatment of HIV and related diseases. Much work has been done in reproductive health, which directly relates to the well-being of HIV-positive women and girls. The laws have also changed, although they may not always be respected, it is an achievement that they have been adopted. For example, a law now exists on the confidentiality of information about patients and their status.

I am also glad that a law on parental leave and paternity benefits has been passed. But, despite this success, much work remains to be done to inform people about their rights and to eliminate the stereotype that caring for a child is solely a female matter.

What gender equality issues would you bring to the attention of Central Asian heads of state?

Even though we have equal access to education for boys and girls, education within families perpetuates gender stereotypes. For example, if you are a boy, you must be strong, and if you are a girl, you should wear pink clothes and not apply for male professions. And we still have many Roma families in which girls do not complete school education.

In the Transnistrian region most leadership positions are still held by men. There is no law ensuring gender equality in politics. We do not have women in business. Women are payed much less than men.

What steps should your country take to advance gender equality by 2030 as an obligation to achieve the Sustainable Development Goals?

In terms of promoting human rights, gender equality and women's rights, much depends on working with the public. Only isolated cases and small groups of activists are trying to foster change. I would like to see women's initiative groups in the decision-making process at the state level to address, for example, health-related issues and promote women's rights. I believe in the importance of a continuous dialogue between the government and civil society.

What are your expectations for the Beijing+ 25 Regional Review Meeting?

When a society mobilizes, starts taking active steps and demands change, then results are achieved. When everyone is silent, nothing can happen. In the Transnistrian region, people are very distressed by the lack of work and, unfortunately, they are more interested in how to make money than how to assert their rights. I would like to see more women in politics and business to eradicate gender stereotypes. Women should change their attitude about themselves and understand that they can do the same things as men.

Related News
05/08/2022
The catalogue of Moldovan women producers has been launched: "Buy Local, Natural, Sustainable products"
01/07/2022
Women from vulnerable groups benefited from support meant to increase their resilience during the multiple crises
27/05/2022
In the words of Tatiana Scutari: "Peacekeeping missions taught me to appreciate peace"
23/05/2022
Ana Afanasova: At iHUB I have a comfortable workplace, as well as lots of valuable communication with my co-workers
20/05/2022
Meet Yaroslav, a young Ukrainian refugee with disabilities who dreams of becoming a DJ
END_OF_DOCUMENT_TOKEN_TO_BE_REPLACED