From Where I stand: "The concept of gender equality scares people in Moldova"

Valentina Rotari, 23, is pursuing a master’s degree in the Education and Culture department at “Alecu Russo” State University in Balti, a small town north of Moldova’s capital, Chisinau. At the end of May, for the first time, Rotari participated in public discussions on gender equality and women's rights, organized by UN Women in Moldova with financial support from the government of Sweden. We talked to her after the event about how her views about gender equality have changed. 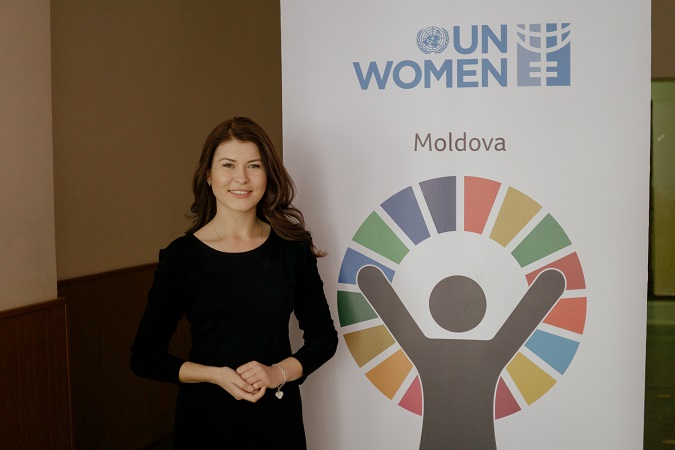 In today’s discussions about gender equality, I understood that women must have the same rights and the same opportunities as men. Gender equality means that women and men can do the same things. For example, men can be involved in childcare and share the house work. We must remove the barriers so deeply rooted in our minds. I also often think about giving up. I think that I should be silent in front of men because I am a woman and because I was taught so by the society. But then, I realize that we have the same rights.

When I enrolled in the university, I started to have a more active life. I started to work and was involved in various projects. My partner at that time said, `You don’t need to do so many things. You should dedicate more time to me`. Then I realized that this is not the man I would like to spend my life with and decided to end the relationship.Lately, I receive more and more questions about why I am not getting married and when I'm going to start a family. When I visit my relatives, this is the first thing they ask me. When I tell them that I prioritize my career, I face a lot of criticism.After today's discussions, I feel that I am even more motivated to fulfill my dreams. In ten years, I see myself as a change agent in the Republic of Moldova. I want to fight gender stereotypes. Promoting gender equality must start from childhood, at home, in the kindergarten, at school, and even at universities. Because education is the foundation of a healthy personality and society."

About 50 students and professors from the College of Medicine in Cahul, a town in the South of Moldova, and 50 students from University "Alecu Russo" in Balti took part in discussions about gender equality. Youth have questioned gender norms and stereotypes and discussed how they face inequalities every day. Among the topics raised were overcoming gender stereotypes, equal involvement of partners in domestic work and childcare, and prevention of discrimination and gender-based violence. Youth discussions are part of UN Women Moldova's campaign "You Know You Can" carried out in March, which presented the stories of 10 women who were the “firsts” in men-dominated fields. These events contribute to achieving Sustainable Development Goal 5 on gender equality and Goal 10 on reduced inequality within and among countries.

Related News
05/08/2022
The catalogue of Moldovan women producers has been launched: "Buy Local, Natural, Sustainable products"
01/07/2022
Women from vulnerable groups benefited from support meant to increase their resilience during the multiple crises
27/05/2022
In the words of Tatiana Scutari: "Peacekeeping missions taught me to appreciate peace"
23/05/2022
Ana Afanasova: At iHUB I have a comfortable workplace, as well as lots of valuable communication with my co-workers
20/05/2022
Meet Yaroslav, a young Ukrainian refugee with disabilities who dreams of becoming a DJ
END_OF_DOCUMENT_TOKEN_TO_BE_REPLACED