(Video) Alina Radu: “I always knew that I could do only what I believed in”

The story of the journalist Alina Radu, Director of Ziarul de Gardă newspaper, is the fourth story of the “You know you can!” campaign. Alina Radu knew she would become a journalist when she was in kindergarten and now, every day, she lives her dream. The idea to create an investigations newspaper came from the desire to inform the public in a correct and impartial manner. Find out how she made history in Moldovan journalism. 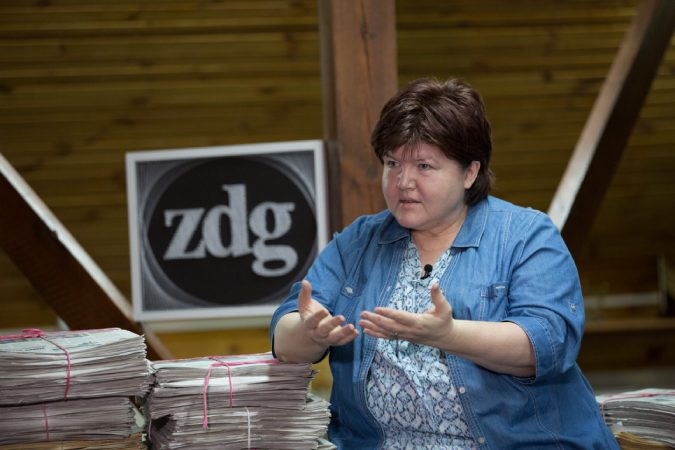 “I always knew that I could only do what I believed in. And if I believe that something is correct and true, that it benefits people, then I know that I want and I can do it.

I decided to become a journalist when I was in the kindergarten and I found out that there was such a profession. Since then, I started following my dream. I started to write letters and articles while I was in school. I graduated from the Faculty of Journalism and I participated in hundreds journalism courses. In 1989 I started working in journalism and still do it every day.

I conducted my first investigations in media institutions where I was employed at the time, and I was doing this in times when in the Republic of Moldova you couldn’t find a description of what an investigation is, not even in manuals.

We researched the field and found that it was an investigation newspaper that was missing. So, I and a few other female journalists said to ourselves: “This is what Moldova needs.” We founded the newspaper in 2004, it is still active today.

The first reaction was: “Some women started to publish a newspaper. It won’t last.” After some time, when a few newspapers closed, the reaction was: “They are women, but they still resist.”

After a few years, Ziarul de Gardă became known for being a reliable newspaper with an impartial team made by great young people. This is when I heard the opinion: “Do you know why Ziarul de Gardă is still published? Because it is run by women.”

Over time, there were different reactions regarding what we do, but we think that now no one would question the fact that a few women can conduct investigations, that they can start and lead a newspaper, can develop a team and they can explore this field.

There are many challenges when conducting investigations, this type of journalism being very expensive, as there are many complex issues. An investigation can last for some time and it is costly. But the worst thing is to receive different types of threats. Still, we chose to go on with this activity, with all its risks. We understood that we can never give up, because it is the most interesting journalistic work.

What today may seem dangerous, tomorrow it becomes simple and interesting. What affected me the most were the investigations where I worked with victims of human, organ and children trafficking, disadvantaged people, people in need, people traumatized as a result of different criminal activities. I maintain relationships with them, but it means that I am also involved in their personal lives and their state of mind in order to understand what happened to them and try to convince society that there are some rights which are violated and that things must change.

My dream is that when I am ready to quit journalism, the newspaper will continue its activity and still be that newspaper which people trust.”

Related News
20/01/2023
Women’s organisations in Moldova receive funding to respond to the humanitarian crisis
19/10/2022
Tech Women Summit, the platform dedicated to women of any age who work in IT or want to pursue IT careers
29/09/2022
The local socio-economic inclusion mechanism of women survivors of domestic violence was created, tested and piloted in Cahul and Ungheni
06/04/2022
Svetlana Patras, a referee and trainer: “True football means passion, movement and, of course, team spirit”
30/03/2022
gender sensitive budgets
END_OF_DOCUMENT_TOKEN_TO_BE_REPLACED