Putting laws into action, police officers respond to violence against women in Moldova 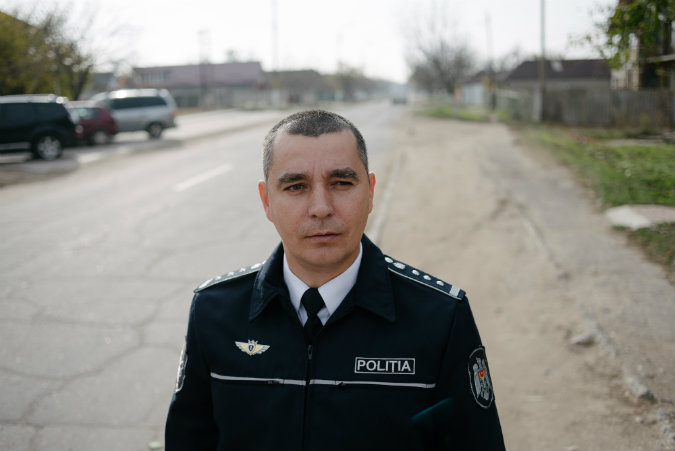 Victor Zglavoci is the Chief of Police in Colibasi, a village about 100 Km south of Chisinau, the capital of Moldova, overseeing ten other villages in the region. Zglavoci takes pride in his work, and even with a lower staff capacity, he is convinced that each of his officers is dedicated to ensuring the safety of the community.

“One night we received a distress call from the deputy chief of the village school, one of the most respected women in our community, and went to her home immediately to investigate the situation. After identifying visible signs of violence, we removed her husband, the aggressor, from the home and issued a restraining order for three months,” says Zglavoci.

Zglavoci made sure that his officers watched the house so that the abuser couldn’t break in and threaten his wife and children. “He tried for months to break in, but we did not let him near the neighbourhood. He finally gave up and left the village. It’s been years now and their children are all grown up. She still works in the school and they are happy. But that incident showed me that no one was safe from violence.”

Lucia Ciobanu* from Chetrosu, a village in Drochia district, also suffered seven years of abuse in the hands of her husband. “I always forgave him, hoping he would change…However, when I became severely ill and he got even more aggressive, I knew this could not carry on; I was too afraid for my life.”

At first, Ciobanu called the police and her husband got fined. “This did not stop him as he was employed and paid it off quite quickly. Later, when they saw that a fine would not stop him, our local police officer issued a restraining order and sent him to a centre [rehabilitation centre for perpetrators] for mandatory attendance,” she adds.

After separating from her husband, Ciobanu benefited from psychological and legal help from the women’s centre in her village. “I am happy that I had the courage to call the police and take this huge step,” she says. “Now, I tell that to all the women I meet in the village—don’t be afraid to take this step, it is one of the best decisions you will make if you’re suffering.”

According to a national survey conducted in 2016, seven out of 10 adult women in Moldova have experienced at least some form of violence from their partners. However, only one in three women [1] report to the police, due to stigma, lack of awareness and economic dependency. Research also shows that eight years since the special laws on preventing and combating domestic violence entered into force, police officers still lack knowledge about the legal provisions and mechanisms to enforce the law.

“The law in Moldova gives us the right mechanisms and tools to take action,” explains Chief Police Officer Victor Zglavoci, who has been part of UN Women’s ongoing initiative to promote good practices among first responders to violence against women in Moldova, including police officers, doctors, teachers, social workers and mayors. “We don’t have to wait for a formal complaint from a potential survivor of violence, for example. By building partnerships with social workers, neighbours, teachers and others in the community who can tell us about families with elevated risk of violence, we can act promptly and carry out official investigations.”

With generous funding from the Swedish Government, UN Women has been working with police officers across Moldova for the past two years, to build their knowledge and improve their capacity to respond to domestic violence cases effectively. The programme, titled “Promoting and multiplying good innovative practices in preventing and combating violence against women”, also encourages police officers like Zglavoci to share good practices with their peers and other service providers through trainings and interactive platforms.

To date, UN Women has engaged more than 350 police officers across the country through trainings led by lawyers and other police officers who have been identified as positive examples.

“Police officers who act as positive examples were selected based on factors such as the officers’ attitude towards domestic violence, the number of successful cases handled by them, number of cases in which police officers took the initiative to identify cases of violence, and the number of restraining orders issued,” explains Lilia Poting, a lawyer from Promo-LEX, UN Women’s partner in this initiative.

“The police are often the first responders when gender-based violence occurs in a community. Their attitudes and behaviours can have a dramatic effect on the lives of women and girls, in the prevention of future acts of violence and on the protection of survivors,” says Asya Varbanova, Acting Representative of UN Women in Moldova.

In the coming year, UN Women will continue to support the Government of Moldova in improving central and local level coordination for support services to survivors of domestic violence, especially in the rural areas, to reach women who are farthest behind.

Related News
05/08/2022
The catalogue of Moldovan women producers has been launched: "Buy Local, Natural, Sustainable products"
01/07/2022
Women from vulnerable groups benefited from support meant to increase their resilience during the multiple crises
27/05/2022
In the words of Tatiana Scutari: "Peacekeeping missions taught me to appreciate peace"
23/05/2022
Ana Afanasova: At iHUB I have a comfortable workplace, as well as lots of valuable communication with my co-workers
20/05/2022
Meet Yaroslav, a young Ukrainian refugee with disabilities who dreams of becoming a DJ
END_OF_DOCUMENT_TOKEN_TO_BE_REPLACED